Home|Around the World With the Cyrus Cylinder: An Interview with John Curtis 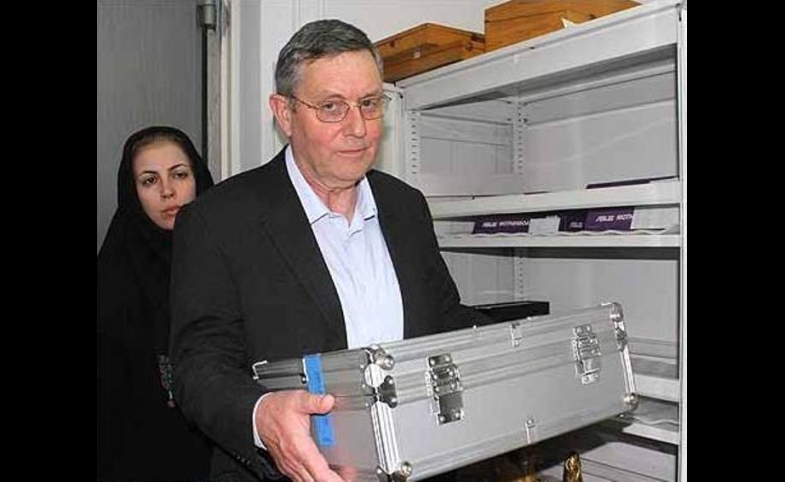 Around the World With the Cyrus Cylinder: An Interview with John Curtis

John Curtis, Keeper of the Middle East Collections at the British Museum, has accompanied the Cyrus Cylinder on its recent international museum tour. He spoke to CPD about the role of cultural institutions in showing iconic objects, and the Cylinder’s reception in different cities, the topic of CPD’s October 30 event.

Below are excerpts from CPD’s conversation with Curtis.

CPD: What differences have you observed between cities in the Cyrus Cylinder exhibition?

JC: What’s been very interesting about the tour is that each museum has done the exhibition slightly differently and that’s what we wanted, always. We don’t want to impose an exhibition on any of the venues. We see this very much as being a series of partnerships. Although we supplied basic didactics, people have taken the opportunity to change them slightly and to modify them, they’ve exhibited the objects in a slightly different order, they’ve taken different amounts of space for the objects, which of course is what you’d expect because they’ve had different amounts of space available. They’ve had different color schemes with different accompanying graphics, and also the museums have added occasionally one or two things from their own collections to supplement the exhibitions. So they’ve all been different and I would say all refreshingly different, and they’ve all, I think, done the subject proud in different ways.

CPD: Could you tell us a little about your experience in Iran when the Cylinder was on exhibit in Tehran a few years back?

JC: It was a slightly smaller exhibition in Tehran. It just consisted of the Cylinder itself and the two tablet fragments. It didn’t have the accompanying fourteen objects like the present exhibition touring the U.S. But nevertheless, it was exhibited in the center of a large room in a freestanding case, so it was a wonderful example of how an exhibition can be structured around a single object if that object is actually powerful enough, as the Cylinder is. The exhibition in Tehran was there for five months and was seen by about half a million people, so it was extremely popular and very well-regarded. I have to say that the Iranian colleagues and curators were a delight to work with.

CPD: What kind of role does a cultural institution like the British Museum play when it presents an exhibition, such as the Cylinder, that draws a very broad interest from around the world?

JC: Well, I think to start with it’s very much the policy of the Trustees of the British Museum, if it is possible, to send iconic objects on a tour like this, the purpose being to give as many people as possible an opportunity to see it. In the case of the USA, this is in recognition of the fact that there are many expatriate Iranian-Americans. It’s also of great interest for the Jewish people and for Parsis, Zoroastrians and actually for everybody who has an interest in the ancient history of the region, of the Middle East. With regards to putting the exhibition together, I chose the objects that would accompany the Cylinder in order to put it into some sort of context, and to tell people something about the ancient Persian Empire and what it contributed to civilization. That’s really the purpose of the small exhibition surrounding the Cylinder.

CPD: Is there any specific story that you would like to share about the Cylinder from any of the exhibits that have taken place, whether in Tehran or in the United States, that are memorable for you?

JC: I think what has pleased me, most of all, is the great interest which has been shown in the Cylinder, not just in Tehran. The Cylinder actually was up in lights in Times Square in New York for a while, which is a great thing, a pretty remarkable thing for an Ancient Near Eastern artifact to be shown in Times Square in that sort of way. And at the time of the opening at the Freer Sackler Gallery [in Washington, D.C.], the opening generated 1.37 billion media impressions in 400 media outlets worldwide. So that’s a pretty impressive statistic and a clear indication of just how much interest the exhibition attracted.

For more information and resources on the Cyrus Cylinder, please refer to the following links:

• The full exhibit at the J. Paul Getty Museum

This week at CPD, we hosted Dr. Timothy Potts, the director of the J. Paul Getty Museum, who discussed the Cyrus Cylinder as a cultural icon and museums as vehicles for promoting global dialogue. Potts shared with us the...

The dynamics of the Iran-U.S. relationship after the Islamic Revolution shifted in 1997, when the reformist Khatami became the president of Iran. The overlap of the Khatami and Clinton administrations, however short, opened...