Home|Public Diplomacy for the Future 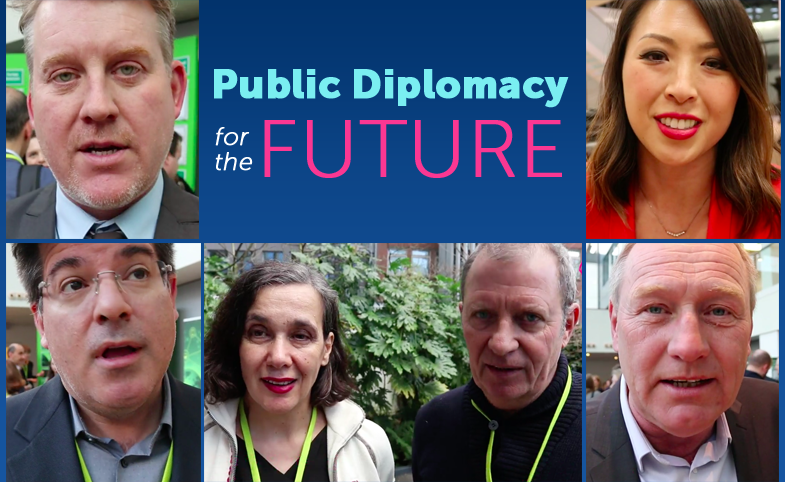 In February 2019, CPD served as academic partner for the 2nd annual "unconference" in digital diplomacy, also known as Diplocamp. The day-long event was hosted by the Dutch Foreign Ministry at its embassy in Brussels, Belgium and convened experts to discuss what the future holds for digital diplomacy. Expertise spanned several disciplines, including diplomacy, technology, storytelling, design and more, and offered diverse perspectives on how these studies can learn from one another and understand how technology is shaping public diplomacy practice.

The "unconference" format allowed attendees to choose their own adventures at Diplocamp—anyone could sign up that morning to host an informal session about a topic of their choosing. The day's schedule was outlined on "The Wall," where attendees could plan their day based on interest in different session topics.

The greater integration of artificial intelligence (AI)—whereby machines possess human intelligence capabilities—into our economies, militaries and everyday lives is poised to transform our societies in the coming decades. Diplomacy is a prime application, whether AI would be used to perform consular tasks or to indicate if a famine is taking place.  Today, questions remain about how much diplomats should learn about AI, how AI can be used to combat global challenges, and how diplomats can combat the challenges posed by AI.

Four Diplocamp sessions were dedicated to AI, demonstrating its strategic importance to diplomats. One of these sessions, “Global Diplomacy Lab on Artificial Intelligence: the Great Disruptor of Diplomacy?,” was hosted by Kyle Matthews, Executive Director of the Montreal Institute for Genocide and Human Rights Studies (MIGS), and Anya Margaret Baum, Managing Director of the Keryx Group. Matthews says, AI will have a transformative effect on the world as we know it, but will also bring significant challenges such as the manipulative use of fake, but realistic, videos.

CPD spoke with Matthews about what needs to happen for diplomats to leverage the power of AI responsibly:

Relationship-building is key to diplomatic practice, and storytelling is a way for diplomats to build deep relationships and foster mutual understanding with people around the world. So how can today's diplomats master ever-changing digital tools to tell their stories? Creating shareable videos, podcasts, gifs and more is crucial for connecting with today’s audiences.

CPD caught up with Gonzales, who spoke about how diplomats can continue to reach important audiences as we move further into the digital age:

The world's most prominent leaders now use Twitter, Facebook and Instagram regularly to connect with audiences around the world. But making the most out of digital engagement is not as simple as creating a profile. Diplomats who manage social media profiles must develop sound strategies to ensure digital diplomacy initiatives meet key objectives.

Twiplomacy founder and lead author Matthias Lüfkens held the session, "Digital Diplomacy Hacks, Tips, and Best Practices," where participants conversed about their experiences using a range of social media platforms. Lüfkens touched on the strategy behind social media engagement, including the advantages and disadvantages of relying on social media to communicate diplomatic messages.

CPD asked Lüfkens to speak more about his work analyzing world leaders' social media use and about his goals for Diplocamp:

Music: "Confetti Memories" by The Face via Sweet Tiger Records

Diplomacy is not often thought of as the most creative discipline, but the future of public diplomacy is one of innovation and creativity. Hybrid Space Lab founders Elizabeth Sikiaridi and Frans Vogelaar use architecture, art and design innovation to bring about positive social change. Their projects bring together architects, urbanists, landscape architects, designers, artists and engineers to leverage creative solutions to spatial issues. This includes a strong public diplomacy element, as several of Sikiaridi and Vogelaar's projects have creatively re-examined spaces with deeply negative historical and emotional roots, such as monuments and borders.

At Diplocamp, Sikiaridi and Vogelaar challenged participants to think creatively about solutions to global issues in their "Cross-Over Diplomacy Lab" session. Key to cross-over diplomacy, they say, is understanding how to incorporate principles and practices from fields outside of traditional diplomacy. While taking part in a collaborative exercise, participants thought critically about how spaces could be re-imagined with out-of-the-box ideas such as art installations, music shows, landscape architecture and even amusement parks.

Sikiaridi and Vogelaar spoke with CPD about the foundations of a creative solution, and how diplomats can draw inspiration from other fields:

As the nature of digital communications has evolved, so have methods of disinformation and misinformation. Facebook has been at the center of these challenges over its 15-year-long life. While questions remain about how social media platforms should address informational manipulation, several companies have developed strategies to improve transparency, remove harmful posts and prevent violence. In light of the 2019 European Parliament election, one of Facebook's initiatives targets political advertising and aims to increase transparency about their funding.

Yang expanded on this initiative with CPD and discussed the topic's relevance to public diplomacy:

By the end of the day, Diplocamp had drawn 150+ attendees to 25 different sessions on technology and diplomacy. Although these sessions covered a host of technology challenges for diplomacy, experts also spoke at length about how that same technology can be used to build a better future.

AI: The Next Frontier in Public Diplomacy

If artificial intelligence (AI) is the future of technology, what's its role in public diplomacy? Watch an exclusive video interview with Kyle Matthews, Executive Director of the Montreal Institute for Genocide and Human...