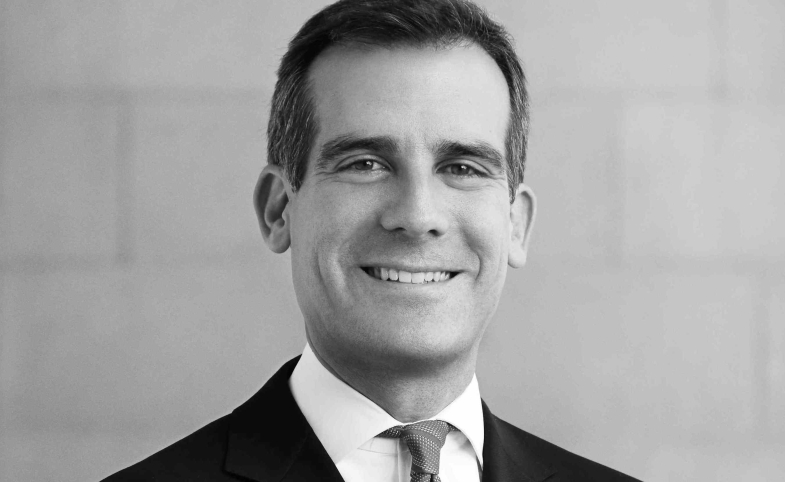 Eric Garcetti is the 42nd Mayor of Los Angeles. Before becoming Mayor, he served as President of the Los Angeles City Council from 2006 to 2012. Garcetti is a fourth generation Angeleno, raised in the San Fernando Valley. He earned his B.A. and M.A. from Columbia University, studied as a Rhodes Scholar at Oxford and the London School of Economics, and taught at Occidental College and USC. Garcetti is active in global city diplomacy. CPD conducted this interview with the Mayor in January 2017.

What is it about Los Angeles that is special, as geopolitics and economy shift to Asia Pacific? How is Los Angeles reimagining its global identity?

We are leading in the global economy, and have long been America’s gateway to the Pacific Rim. No matter where they’re headed, 43 percent of the goods that come into America move through the twin ports of the San Pedro Bay, which are responsible for one out of every 51 jobs in this country. Our port is number one in America, and we’re spending $2.6 billion over 10 years to keep it that way.

Los Angeles is also a global destination. More people start or end their journeys at LAX than at any other airport in the world, which is why we’re investing over $14 billion to work to renovate every terminal and finally connect rail to the airport. This is another major infrastructure investment, and will help to ensure that LAX continues to see record-breaking numbers of passengers, like the 80 million people we welcomed last year. Not only that, the number of Chinese visitors increased by nearly 22 percent in 2016, making L.A. the first U.S. city to have more than 1 million visitors from China.

There is no question that this is a Pacific century, and that Los Angeles is positioned to take a leadership role in it. We have long been a worldwide center for manufacturing, trade, entertainment, and other creative industries.

This is a city that reflects what the world looks like today, and how America will look tomorrow. Today, Los Angeles is ready to cement its place as not just an economic and cultural capital, but a political one as well. In this new century, L.A. will be where the world looks for inspiration, new ideas, and strong leadership that redefines how people everywhere can work, grow, and prosper together.

How would a successful bid for the 2024 Olympics to be in Los Angeles further develop this identity?

Los Angeles has always stepped up when the world needed us, and we’ve always changed the Games. We hosted during the Great Depression in 1932, and built the first Olympic Village — a model of athlete housing for all future Games. The Games returned to L.A. in 1984, and left us with a $230 million surplus that was invested in sports programs to serve millions of Angelenos, including Olympians like Venus and Serena Williams.

Los Angeles is that city.  If we host the 2024 Games, they will be transformative. That’s because we are a city that defines what’s next. We kicked off the space age, and today we are busy reinventing it. We sent the world’s first email, and now we are connecting a new generation to the world’s stories through Facebook, Snapchat, and Twitter.

Los Angeles is a global city, and one of the most diverse cities in human history — Angelenos come from more than 100 countries, speak at least 220 languages, and represent countless traditions.

Los Angeles is a city of new beginnings, a place where people and industries come to reimagine themselves, sustained by our enduring core values of diversity, openness, and healthy living — values that align with the core values of the Olympic Movement.

We want to bring the Olympics back to America to show that our nation remains a welcoming presence on the world stage. And L.A. is the ideal home for the Games, because every athlete would be on the home team in a city as diverse as ours.

Los Angeles is one of a few American cities whose Mayor has an international relations department. Why is it important for a city leader to have a global presence right now?

Los Angeles is a global city, and one of the most diverse cities in human history — Angelenos come from more than 100 countries, speak at least 220 languages, and represent countless traditions. In this city, 39 countries are represented by their largest populations outside of their own borders. We are also home to the world’s third largest Consular Corps, and 104 consulates from around the world. I am proud of the work that the staff of my offices of International Relations and Protocol, City Services, and Public Engagement do every day to engage with the diverse communities that make up this city, and respond to their needs.

We are also working hard to deepen this city’s connection with the rest of world. We regularly host city officials from around the world who want to learn about our Sustainable pLAn, or how we are using technology and open data to deliver services and promote civic engagement.

I’ve traveled on several trade missions, which have resulted in new partnerships, increased tourism, and economic opportunity here and abroad. And I launched an export initiative to double the number of L.A.-based businesses that are exporting their goods. Last year, I joined with the mayors of our sister cities — Auckland, New Zealand and Guangzhou, China — on the Tripartite Economic Alliance to share expertise on urban design, architecture and sustainable technologies that will define how cities look and operate in the 21st century.

How are mayors demonstrating global leadership from a local level? How do you engage the world as the Mayor of Los Angeles?

Cities today are home to more than half the world’s population. When mayors come together, their collective impact is world-changing — because cities are where national goals turn into local progress.

For example: In 2015, we hosted the U.S.-China Climate Leaders’ Summit, which brought together 600 leaders from both sides of the Pacific, and it resulted in a landmark agreement that Chinese cities signed onto to cap emissions up to 10 years early. This is significant, because cities now house more than half the world’s population and generate 70 percent of all greenhouse gas emissions.

So whether we are talking about climate change, cyber threats or virtually any other challenge on the world stage, the fact is that our global issues are local today, and local issues are equally global in nature. Now is the time for us to turn toward the rest of the world — not isolate ourselves from it.