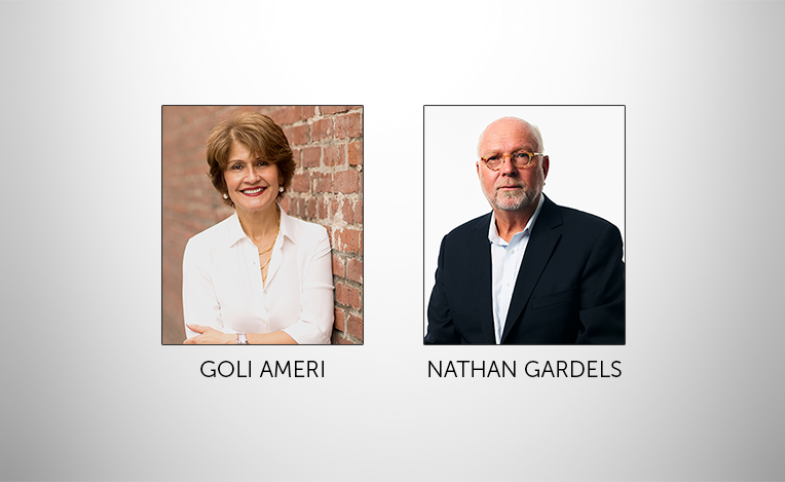 CPD is delighted to welcome Goli Ameri and Nathan Gardels to the CPD Advisory Board.

“Goli and Nathan are both distinguished leaders with a wealth of experience in public diplomacy and international relations," said Barry A. Sanders, CPD Advisory Board Chair. "No doubt they will be excellent advisors as we steward CPD through this exciting period of growth.”

"We are thrilled that Goli and Nathan are joining the Center’s influential advisory board," says CPD Director Jay Wang. "The board plays a critical role in ensuring the continued success of CPD in the years ahead and in broadening the support for the field at large."

Goli Ameri is the CEO and co-founder of StartItUp, an online SMB Advisory Marketplace. She also founded eTinium, a boutique consulting and market research firm. Prior to her entrepreneurial experience, she was a Director at US Leasing responsible for Market Evaluation and Planning. As the U.S. Assistant Secretary of State, Goli was responsible for the second-largest Bureau at the State Department with responsibilities for the bulk of U.S. Public Diplomacy. In addition, she launched the Iraqi Cultural Heritage Project and established the Vietnam Education Task Force. Ameri’s previous positions include Under Secretary for Humanitarian Diplomacy at the International Federation of Red Cross & Red Crescent Societies; Public Delegate to the 61st session of the United Nations Commission on Human Rights; and Presidentially nominated Representative to the 60th Session of the United Nations General Assembly. She serves on the board of Freedom House, the UC Berkeley Haas School AMENA Center for Entrepreneurship and Development, and the Rand Center for Middle East Public Policy and America Abroad Media. Ameri received her BA & MA from Stanford University and has studied at the Sorbonne. She is the recipient of the Ellis Island Medal of Honor and has a son who graduated from USC.

Nathan Gardels is the editor-in-chief of The WorldPost and co-founder and a senior adviser to the Berggruen Institute. He also has been the editor of New Perspectives Quarterly since 1985 and Global Viewpoint and Nobel Laureates Plus (1989-2010). Gardels holds degrees in Theory and Comparative Politics and in Architecture and Urban Planning from UCLA. He spent four years as key adviser to the Governor of California on economic affairs with an emphasis on public investment, trade issues, the Pacific Basin and Mexico before becoming executive director of the Institute for National Strategy from 1983-85. He also was a founding member at the New Delhi meeting of Intellectuels du Monde and a visiting researcher at the USA-Canada Institute in Moscow. Other titles Gardels currently holds are Media Fellow of the World Economic Forum and a member of the Council on Foreign Relations. Additionally, he has written widely for global newspaper publications and authored numerous books. Gardels has also conducted policy research at the People’s Institute of Foreign Affairs in Beijing, the Swedish Institute in Stockholm, and the Friedrich Ebert Stiftung in Bonn.