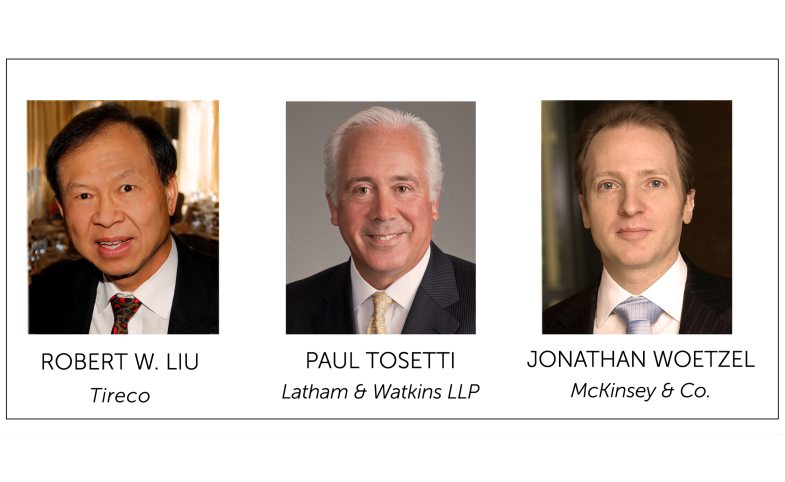 CPD is delighted to welcome Robert W. Liu, Paul Tosetti and Jonathan Woetzel to the CPD Advisory Board. All three are distinguished leaders in their fields and have a keen interest in international relations and public diplomacy.

"Our advisory board is a critical resource to the Center," said Barry A. Sanders, CPD Advisory Board Chair. "I believe our Board’s growth is an important show of confidence in CPD."

CPD Director Jay Wang notes that this Board expansion signifies a greater capacity to widen the Center’s reach. "It is our top priority to find ways to mobilize societal resources to invest in improving public diplomacy practices and in nurturing the next generation of practitioners,” said Wang.

Robert W. Liu is the founder and Chairman of Tireco, Inc., one of North America’s largest private brand marketers and distributors of tires and tire related products. Bob graduated from Cheng-Kung University in Taiwan and, later, the University of Utah where he earned his M.S. in Civil Engineering. In addition to serving on the boards of various Asia-based companies, Bob is a board member of the Pacific Council on International Policy where his family created and continues to support the PCIP’s annual "State of the Global City" address by the Mayor of Los Angeles. He is an active supporter of the University of Notre Dame where his family established the Liu Institute for Asia and Asian Studies; in addition, he also serves as an Executive Fellow for Notre Dame’s Keough School of Global Affairs. Bob and his family are founding members of USC’s Marshall Family Business Program and have also supported the creation of the pediatric department at Fu Jen Catholic University Hospital in Taipei, Taiwan.

Paul Tosetti is a partner in the Los Angeles office of Latham & Watkins LLP and is a member of that firm’s Corporate Department. He served for ten years as the Co-Chair of the firm's global Mergers and Acquisitions Practice. Mr. Tosetti is a 1981 graduate of Harvard Law School, at which he served as Supreme Court Editor of the Harvard Law Review. He also holds degrees from Harvard College and Oxford University. Mr. Tosetti was selected by the American Lawyer as a “Dealmaker of the Year” in 2015, and as a "World Leading Lawyer" in the 2015 edition of Who's Who Legal: Corporate - M&A and Governance; named the Best Lawyers’ 2013 Los Angeles Mergers & Acquisitions Law "Lawyer of the Year"; cited by Best Lawyers In America as 2011 Los Angeles Corporate Governance and Compliance Lawyer of the Year; and was named one of the country's leading 500 attorneys by Lawdragon Magazine in 2009. Mr. Tosetti serves as the President of the Board of Trustees of Catholic Charities of Los Angeles, Inc.; as a member of the Executive Committee of the Board of Directors of the Los Angeles Opera; as a member of the Board of the Pacific Research Institute; and as a Trustee of the Magdalen College, Oxford, Development Trust.

Jonathan Woetzel is a Senior Partner at McKinsey & Co. and Director of the McKinsey Global Institute where he leads MGI research on productivity, urbanization, infrastructure, inequality and regional economies. Based in China since 1986, he also leads McKinsey’s Cities Special Initiative and co-chairs the non-profit think tank Urban China Initiative, a collaborative project of Tsinghua, University and McKinsey & Company that aims to develop and implement solutions to China’s urbanization challenge. As an expert on energy, sustainability, and economic master planning, Jonathan has advised national and local governments in Asia, Africa, Europe and the Americas on topics including improving the foreign investment environment, energy policy, and economic development. Jonathan actively participates in international forums including the Joint US-China Coalition for Clean Energy, and also guest lectures at Peking University’s Guanghua School of Business and the China-Europe International Business School. He has written five books on China including Capitalist China: Strategies for a Revolutionized Economy, and currently has 3 Amazon international business bestsellers.