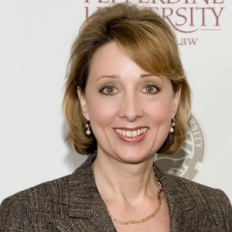 Professor Graffy served as the first Deputy Assistant Secretary (DAS) of State for Public Diplomacy at the U.S. State Department. Secretary of State Condoleezza Rice had created the position to better link policy with public diplomacy by dual-hatting DASes in the geographic bureaus with the “R” Bureau (the Bureau for Public Diplomacy and Public Affairs). As DAS in the Europe and Eurasia Bureau, Graffy traveled to over 40 countries and worked with U.S. embassies and a team in Washington to communicate U.S. policy, values and culture.

She created the first-ever “media hub” for the U.S. government with radio and television broadcasting facilities based in Brussels and established the “Ben Franklin Transatlantic Fellowship,” a program that brings together students ages 16–18 from former Eastern Bloc countries, Western Europe and the U.S. to study democracy, civil society, critical thinking and disinformation, among other topics.

Graffy was the first diplomat to use Twitter and advanced “Public Diplomacy 2.0” using various social media platforms. She introduced “Visual Diplomacy” as a tool for the U.S. government’s public diplomacy efforts and produced a training video for such purposes for Foreign Service officers and locally engaged staff. She also created “Green Diplomacy” as a means of engaging audiences through joint environmental interests.

Graffy was based in London for over 20 years as Academic Director of Pepperdine’s London Law Program and was Director of Global Programs. She has an English law degree and was called as a Barrister of the Middle Temple, where she is a Bencher, and received her LLM in international law from King’s College, master’s degree from Boston University and bachelor’s from Pepperdine University. She taught Public Diplomacy for Pepperdine’s School of Public Policy and teaches Public International Law, International Criminal Law, International Environmental Law, 1st year Criminal Law, and Negotiation at Pepperdine Caruso Law School.

She is a frequent commentator on television and radio and has written for The Sunday Times and The Times(London), The Wall Street Journal, The Washington Post, The Telegraph (London), The Hill and the Los Angeles Times.