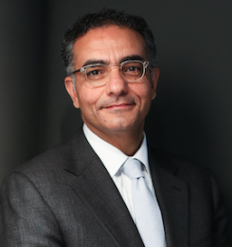 Fadi also held corporate posts at AT&T (T), Ingram Micro (IM), and IBM (IBM), where as General Manager, he led the growth of IBM’s Global Technology Services in the Middle East and Africa. He served as the President and CEO of ICANN from 2012 to 2016, the international body governing the Internet’s key resources and policies. Additionally, Fadi was senior advisor to Klaus Schwab, the Executive Chairman of the World Economic Forum, and a member of the UN Secretary-General’s High-Level Panel on Digital Cooperation.  Recently, Carnegie Corporation of New York honored Fadi as a 2020 Great Immigrant.

Read: Project Syndicate: How to Govern a Digitally Networked World

View: TED interview, What everyday citizens can do to claim power on the Internet.

August 29, 2016 - CPD Welcomes Former CEO of ICANN to Advisory Board