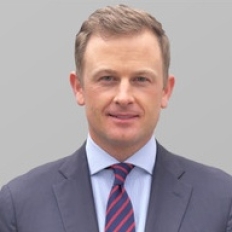 Garrett Marquis has an extensive career in leadership roles in global communications and international business. He has counseled CEOs on communicating a corporation’s brand value, reputation and business narrative and is adjunct professor of strategic communications for the University of Southern California. Having scaled organization and driven organizational transformation, Mr. Marquis has a track record of leading matrixed and cross-functional teams to achieve results.

Mr. Marquis was Vice President and a member of the CEO’s Executive Team at the U.S. International Development Finance Corporation (DFC). He managed the global strategic business development department, helping corporations enter new markets through partnerships and investments of up to $1B through direct equity and structured finance across sectors in Europe, Asia and South America.

Prior to joining the DFC, Mr. Marquis served as a senior commissioned officer at the National Security Council and was a primary counselor to the National Security Advisor. He worked across the State Department, Defense Department and Intelligence Community to direct global policy communications, stakeholder engagement and crisis management to advance the U.S. national security agenda on matters of cyber and energy security, finance and trade, bioterrorism and nuclear proliferation. Additionally, he hired and managed an organizational structure and culture that allowed for strategic prioritization and responsiveness. He also headed development of the U.S. communications strategy for the G7 conference in France, the G20 conferences in Japan and Argentina and the 2019 North Korea–United States Hanoi Summit.

Mr. Marquis holds a Master of Public Administration degree and a Bachelor of Arts in International Relations degree from the University of Southern California (USC). He also earned a certificate from the Harvard Business School High Potentials Leadership Program. Mr. Marquis has conducted seminars for the governments of the United Kingdom and Qatar, National Intelligence University, Southern Methodist University and Georgetown University.