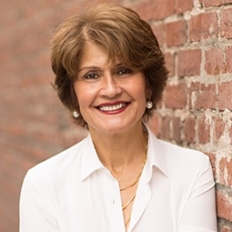 Goli is the CEO and cofounder of StartItUp, an online SMB Advisory Marketplace, connecting businesses with 1 or more live advisors and strengthening the advisory relationship with a broad range of AI and business tools.  Ms. Ameri also founded eTinium, a boutique consulting and market research firm in the telecom industry in the 80s, during the deregulation of the telecom industry.
Prior to her entrepreneurial experience, Ms. Ameri was a Director at US Leasing responsible for Market Evaluation and Planning for a portfolio of over $200 million in assets in high-technology equipment.
As the US Assistant Secretary of State, Goli was responsible for the second largest Bureau at the State Department with responsibilities for the bulk of US Public Diplomacy. She established the business case for expanding the international people to people exchanges of the Bureau of Educational and Cultural Affairs into cyberspace and promoted the Bureau's exchange programs to the private sector and established the first official public/private partnerships in the State Department.
In addition, she launched the Iraqi Cultural Heritage Project to repair the Baghdad Museum and provide capacity building for the archeological scene in Iraq, signaling a turn in US/Iraqi relations. Ms. Ameri also established the Vietnam Education Task Force comprised of the private sector, academia and the Vietnamese and US governments to address higher education issues. She launched a student exchange program to commemorate the 30th Anniversary of resumption of relations with People's Republic of China
As the Under Secretary for Humanitarian Diplomacy at the International Federation of Red Cross & Red Crescent Societies, she established the IFRC as a global humanitarian actor and spokesperson at all major international organizations such as the UN, the EU, ASEAN, etc. and established and strengthened partnerships with major global organizations such as International Olympic Committee, World Economic Forum, Clinton Global Initiative, UNESCO, World Peace Forum among others. She also promoted leveraging technology for improved humanitarian response. Goli  positioned the IFRC as a 'development' partner for access to $120 billion in annual development funds through partnerships and outreach to the OECD, Development Banks, government development agencies such as USAID, DFID and Swedish SIDA and exerting influence at significant global conferences such as the 4th High-level Forum on Aid Effectiveness in Busan South Korea
Ms. Ameri’s previous positions include service as a Presidentially nominated Representative to the 60th Session of the United Nations General Assembly, and as a Public Delegate to the 61st session of the United Nations Commission on Human Rights.
Ms Ameri serves on the board of Freedom House as the Chair of Governance Committee. She also serves on the Advisory Boards of the UC Berkeley Haas School AMENA Center for Entrepreneurship and Development, Rand Center for Middle East Public Policy and America Abroad Media, as well as a member of the Principles Committee of Former Officials for Declaration of Principles for Freedom, Prosperity, and Peace at the Atlantic Council.
Goli Ameri received her BA & MA from Stanford University and has studied at the Sorbonne. She is the recipient of the Ellis Island Medal of Honor presented annually to American citizens whose accomplishments in their field and inspired service to the United States are cause for celebration.
Ms. Ameri’s son Sherwin Ameri is a graduate of USC.