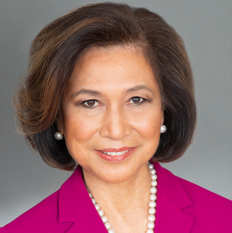 Mrs. Lewis is Chair and CEO of TLC Beatrice, LLC, a family investment firm. A lawyer by profession, admitted to practice in the Philippines and New York, Mrs. Lewis was the first Filipino woman to pass the New York bar without attending law school in the United States.

Having won her discrimination case against the U.S. Immigration and Naturalization Service in 1987, she integrated the agency, now called Citizenship & Immigration Service (CIS). She co-authored “How to Get A Green Card,” now in its 12th edition and a bestseller in its genre.

Mrs. Lewis served as Chair and CEO of TLC Beatrice International, a $2 billion multinational food company with operations all across Europe, from 1994-2000. She assumed its leadership after the death of her husband, Wall Street financier Reginald F. Lewis who, in 1987, engineered a leveraged buyout for $985 million of Beatrice International Food thus becoming the 1st African American to create a billion dollar company.

Mrs. Lewis is Chair of the Reginald F. Lewis Foundation, which is a benefactor of Harvard Law School, Museum of Maryland African American History & Culture, Virginia State University and the Lewis College in Sorsogon her home town in the Philippines. A building has been name at those institutions in Mr. Lewis’ honor. The foundation is also a major donor to the National Museum of African American History and Culture in Washington, D.C.