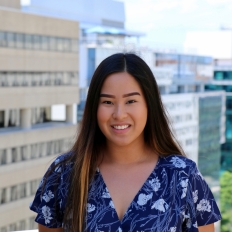 Madeleine Masinsin is a fourth-year student concurrently pursuing a Master of Public Diplomacy and a B.A. in International Relations with a minor in Dance.

Originally from Los Angeles, Maddie transferred to USC in 2017 after spending her freshman year at John Cabot University in Rome, Italy. At JCU, Maddie developed an interest in international affairs, which she has since furthered via research with USC’s Near Crisis Project and participation in the Dornsife D.C. Program. While in D.C., Maddie interned for the U.S. Department of State’s Office of Multilateral and Global Affairs (DRL/MLGA), focusing on its Internet freedom, business human rights, and LGBTI rights portfolios. Following her time at State, Maddie interned for the OECD Washington Center, where she worked on public affairs and media relations. Currently, she is a Virtual Student Foreign Service intern for the State Department’s Global Engagement Center.

Following graduation, Maddie hopes to return to Washington or move back abroad to pursue a career at the intersection of human rights, emerging technology, and public diplomacy. She is excited to be working with CPD to explore these interests and is looking forward to gaining a better understanding of the public diplomacy fields as a whole.