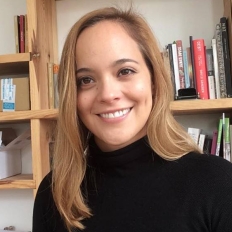 Mariana is a PhD candidate in Iberian and Latin American Cultures at Stanford University. Her dissertation, “From Nation-Building to Nation-Branding: Literature and Public Diplomacy in 20th Century Mexico,” explores the intersection between public diplomacy and literature in post-revolutionary Mexico. Her work focuses particularly on the predominant figure of the writer/diplomat in the Mexican Diplomatic Service and the use of literary media as a means for the post-revolutionary governments to communicate with foreign audiences as part of their effort to gain international recognition, trans-national support, and approval for foreign policy.

Prior to her doctoral work, Mariana worked at the Mexican Embassy in Washington DC and at the Foro Consultivo Científico y Tecnológico in Mexico City. Mariana earned her MA in Latin American Studies from Stanford University, where she was awarded the Gran Mariscal de Ayacucho Graduate Fellowship, and her BA in International Relations from the Instituto Tecnológico Autónomo de México (ITAM), where she received a CONACYT Research Fellowship.