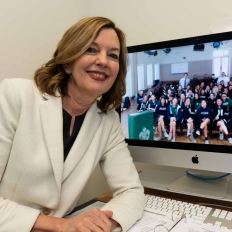 Marie Royce is a businesswoman, diplomat and educator.

Royce is the CEO of Marie Royce LLC (www.MarieRoyce.com) and serves on the Board of Cognito Health. She was a Fortune 500 Executive for 25+ years at The Procter & Gamble Company, Marriott International and Nokia/Alcatel-Lucent.

Marie Royce was unanimously confirmed by the United States Senate and sworn in as Assistant Secretary of State, Educational and Cultural Affairs (ECA) on March 30, 2018 and served until January 20, 2021. In her role she managed the Bureau’s highest budget: $760 million, 674 employees and a wide range of global programs to advance U.S. foreign policy objectives through educational, professional, cultural and sports exchanges that promote mutual understanding between the people of the United States and people of other nations. She oversaw the Presidentially-appointed Fulbright Foreign Scholarship Board and the Presidentially-appointed Cultural Property Advisory Committee (CPAC). The Academy of Women Entrepreneur’s (AWE) was created and launched in 80 countries by Royce. Assistant Secretary Royce held a Top Secret (TSI) clearance.

Royce earned a Bachelor of Science in Business Administration (double major) at California State Polytechnic University, Pomona, and an MBA at Georgetown University in International Business with honors, Beta Gamma Sigma. She was a full-time university professor at California State Polytechnic University, is the recipient of the Distinguished Alumni Award, and served as commencement speaker. Assistant Secretary Royce was recognized with the Doctor Honoris Causa from the University of Tirana, in Albania. Royce was honored with Pomona Catholic High’s Distinguished Alumna award. She serves on the USC Center on Public Diplomacy’s Advisory Board, and formerly served on the Board of Advisors for Cal Poly Pomona, Cal State Fullerton and the Alliance Francaise de Washington, D.C.

Royce held leadership positions on 20 non-profit boards and was a private sector appointee on the Advisory Committee on International Communications and Information Policy (ACICIP) at the State Department. She served on two U.S. Cultural Exchange Boards: Meridian International and the American Council of Young Political Leaders (ACYPL). Royce participated as an ACYPL delegate to Hungary and Poland and was recognized with the “ACPYL Honors Award.”

King Felipe VI of Spain awarded Marie with the Order of Civil Merit, Commander by Number medal for her support for study-abroad programs and the U.S.-Spain Fulbright program. Royce received the Internationalism Award from the American Women for International Understanding, the Leadership Award from the Congressional Families for Cancer Prevention, the Nooristan Foundation Commitment Award for Afghan Women, and the Top Alumni Advisor award from the co-ed professional fraternity, Pi Sigma Epsilon.

Marie Royce and her husband Ed reside in Alexandria, Virginia.