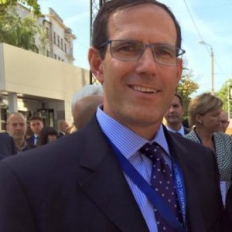 Mr. Matthew Armstrong is an author and advisor on public diplomacy, international information, and propaganda. His emphasis is examining how operating structures, authorities, doctrine, and individual opinions impact informational activities in support of national or organizational strategy. His focus is on the traditional and emerging security issues facing civilian and military government agencies, the Congress, news organizations, think tanks, and academia across several continents. He is an Associate Fellow at King’s Centre for Strategic Communication at King’s College London.

From August 2013 through December 2016, he served as a Governor on the Broadcasting Board of Governors. He was nominated by the President and confirmed by the Senate into this part-time role where he provided strategic guidance and oversight over the Voice of America, Radio Free Europe / Radio Liberty, Radio Free Asia, Office of Cuba Broadcasting, and the Middle East Broadcasting Network. Collectively, and separate from the expansive Internet Freedom programs of the BBG and RFA, the networks operated in up to 61 languages in over 100 countries.

Since 2012, Mr. Armstrong has served as a Member of the Board of The Public Diplomacy Council, and since 2014 as the Board Secretary. The PDC is a nonprofit organization committed to the importance of the academic study, professional practice, and responsible advocacy of public diplomacy. He has also been a member of the National Press Club since 2009.

In 2011, Mr. Armstrong served as the Executive Director of the U.S. Advisory Commission on Public Diplomacy where he reoriented the organization to its core purpose of “advocacy and oversight over U.S. government efforts that intend to understand, inform, and influence foreign publics.”

Mr. Armstrong obtained both his B.A. in International Relations and a Master of Public Diplomacy at the University of Southern California (USC).