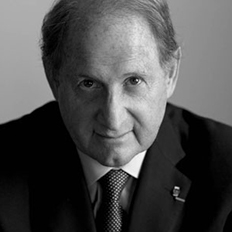 Mike began his career at Universal Studios in 1964. In 1965 he became an agent at the General Artist Corporation and later moving into the vice president position of the Creative Management Agency. Later he joined International Famous Agency as its vice president of the motion picture department in 1971. There, he worked with Steven Spielberg and Francis Ford Coppola amongst others.

In 1974, United Artists brought him in as senior vice president of production. There, he was part of the team responsible for One Flew Over the Cuckoo's Nest, Rocky, and Annie Hall, which won best Pictures Oscars® in 1975, 1976 and 1977 respectively. United Artists made a number of other notable films at the time, including Apocalypse Now, Raging Bull, Network and Coming Home.

In 1978, Mike co-founded Orion Pictures. During his tenure, Orion released films such as Platoon, Amadeus, Robocop, Hannah and Her Sisters, The Terminator, Dances with Wolves, and Silence of the Lambs.

In 1990, Mike became the chairman of TriStar Pictures where he oversaw release of films such as Philadelphia, Terminator 2: Judgment Day, Sleepless in Seattle, Cliffhanger, The Fisher King, Legends of the Fall and Hook.

In 1995, Mike co-founded Phoenix Pictures. As its chairman and CEO, Mike helped produce films such as The People vs. Larry Flint, The Mirror Has Two Faces, U-Turn, Apt Pupil, The Thin Red Line, The 6th Day, Basic, Holes, All the King's Men, Zodiac, Pathfinder and Miss Potter, among others. The Thin Red Line and The People vs. Larry Flint each received Oscar® nominations.

Mike serves on the Advisory Board of the USC Center on Public Diplomacy at the Annenberg School.