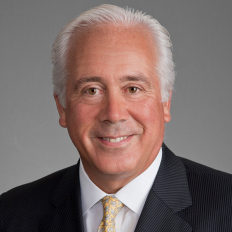 Paul Tosetti is a partner in the Los Angeles office of Latham & Watkins LLP and is a member of that firm’s Corporate Department. He served for ten years as the Co-Chair of the firm's global Mergers and Acquisitions Practice. Mr. Tosetti is a 1981 graduate of Harvard Law School, at which he served as Supreme Court Editor of the Harvard Law Review. He also holds degrees from Harvard College and Oxford University. Mr. Tosetti was selected by the American Lawyer as a “Dealmaker of the Year” in 2015, and as a "World Leading Lawyer" in the 2015 edition of Who's Who Legal: Corporate - M&A and Governance; named the Best Lawyers’ 2013 Los Angeles Mergers & Acquisitions Law "Lawyer of the Year"; cited by Best Lawyers In America as 2011 Los Angeles Corporate Governance and Compliance Lawyer of the Year; and was named one of the country's leading 500 attorneys by Lawdragon Magazine in 2009. Mr. Tosetti serves as the President of the Board of Trustees of Catholic Charities of Los Angeles, Inc.; as a member of the Executive Committee of the Board of Directors of the Los Angeles Opera; as a member of the Board of the Pacific Research Institute; and as a Trustee of the Magdalen College, Oxford, Development Trust.