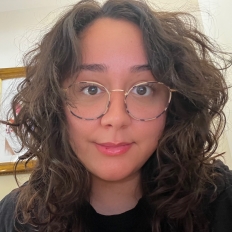 Sarai Colón is a graduate student pursuing a Master of Public Diplomacy at the USC Annenberg School for Communication and Journalism.

Sarai received her Bachelor of Arts from New York University in 2018 in Anthropology with a minor in East Asian Civilizations. As an undergraduate student, Sarai studied abroad in Shanghai, China, and focused much of her research on relations between China, North Korea, and South Korea.

Sarai has interned at the International Rescue Committee working with refugees from Central America and assisting with their resettlement in New York City. This spring she interned at the U.S. Department of State with the Office of Policy, Planning, and Resources (R/PPR). She currently serves as the Director of Alumni Relations for the Society of Public Diplomats at USC and is a member of USC's Liberty in North Korea rescue team.

Sarai is interested in cultural diplomacy, global security, and regional diplomacy in East Asia. After graduating, Sarai hopes to serve as a Foreign Service Officer.