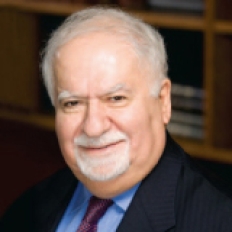 Vartan Gregorian is the twelfth president of Carnegie Corporation of New York, a grant-making institution founded by Andrew Carnegie in 1911. Prior to his current position, which he assumed in June 1997, President Gregorian served for nine years as the sixteenth president of Brown University.

For eight years (1981-1989), President Gregorian served as a president of the New York Public Library, an institution with a network of four research libraries and eighty-three circulating libraries. In 1989 he was appointed president of Brown University.

President Gregorian is the author of The Road To Home: My Life And Times; Islam: A Mosaic, Not A Monolith; and The Emergence of Modern Afghanistan, 1880-1946. A Phi Beta Kappa and a Ford Foundation Foreign Area Training Fellow, he is a recipient of numerous fellowships, including those from the John Simon Guggenheim Foundation, the American Council of Learned Societies, the Social Science Research Council, and the American Philosophical Society. He is a fellow of the American Academy of Arts of Sciences, and the American Philosophical Society. In 1969, he received the Danforth Foundation’s E.H. Harbison Distinguished Teaching Award.

In 1986, President Gregorian was awarded the Ellis Island Medal of Honor and in 1989 the American Academy of the Institute of Arts and Letters’ Gold Medal for Service to the Arts. In 1998, President Clinton awarded him the National Humanities Medal. In 2004, President Bush awarded him the Medal of Freedom, the nation’s highest civil award. He has been honored by various cultural and professional associations, including the Urban League, the League of Women Voters, the Players Club, PEN-American Center, Literacy Volunteers of New York, the American Institute of Architects, the Charles A. Dana Foundation, and the Elysium Between Two Continents. He has been honored by the city and state of New York, the states of Massachusetts, Texas, Pennsylvania, and Rhode Island, and the cities of Fresno, Austin, Providence, and San Francisco.