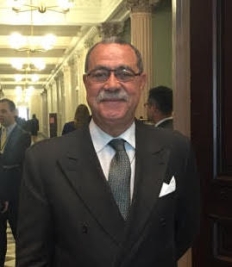 Earle Scarlett is a Jamaican-born U.S. diplomat with global experience. Diplomatic postings include: Cameroon, Brazil (twice), Philippines, Ex-Yugoslavia, Bosnia, and Charge' d'Affaires a.i. in Ireland. Postings at the State Department include: China and Somalia Desks. As Lecturer, he was a State Department Dean Rusk Fellow at the Institute for the Study of Diplomacy at Georgetown University where he subsequently was examiner for Master’s theses in foreign affairs. In the U.S. State Department, he was Director of Training for Political Officers at the George Shultz National Foreign Affairs Training Center. Scarlett was also Advisor for International Affairs at Maxwell Air Force Base where he taught at the Air War College.

After a 30 year career in diplomacy he has taught and lectured at the following institutions: University of Bologna (2005-2010), Emory University (2004), University of Georgia, Columbia University, Georgia Technical University, and Lynn University. Before entering the Foreign Service he taught Political Science and International Relations at Loyola-Marymount University Los Angeles.

Scarlett was educated in Jamaica, U.S., France, and UK.