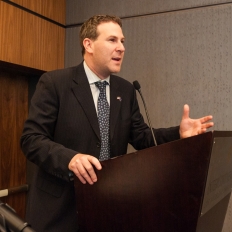 Neil Simon is vice president of Portland-based Bighorn Communications. He has held public diplomacy leadership roles for the U.S. government and international organizations. He is currently managing a six-year public diplomacy project funded by the EU aimed at strengthening EU-U.S. relations. His writing for the CPD Blog does not express the official views of the European Union.

Neil H. Simon started his career in journalism and still keeps the value of storytelling at the heart of his work. Whether digging a car out of a ditch while exposing the reality of women laborers in Mexico or squishing in the trunk of a hatchback to usher reporters to observe fraudulent election practices in Central Asia, he’s as comfortable in the field as he is in your boardroom. Having advised U.S. Senators and Members of Parliament across 57 countries and directed communications for a large company and government agencies, he’s proud to be back home in Portland.

Neil's policy work has resulted in state and federal laws that increase transparency in the fields of energy, improved port and homeland security, and electoral governance. He is also an award-winning documentary filmmaker, having produced the first film featuring survivors from an FBI-run World War II Japanese Internment Camp, as well as other productions about the power of bipartisanship, the rise of New Mexico Gov. Bill Richardson, and municipal smoking bans.