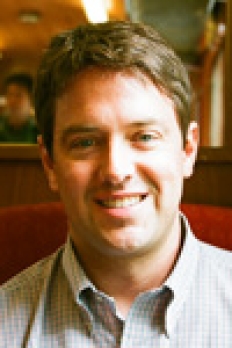 Andrew Wulf holds a Ph.D. from the School of Museum Studies at the University of Leicester in the United Kingdom. His dissertation studied the genesis of exhibition culture in American foreign policy and addresses U.S. cultural exhibitions in Europe, Latin America, and the Middle East, from 1938 through 2003. He received his MA in Art History and Museum Studies at the University of Southern California in 2005.

Andrew began his museum career at the Victoria and Albert Museum in London in 2002, and served as a curatorial intern on the Skirball Cultural Center's blockbuster Einstein exhibition in 2004 and as a curator at USC's Fisher Museum of Art. For six years Andrew worked as Curator of Exhibitions for the USC Libraries’ Special Collections, where he produced over twenty cultural exhibitions that explore a wide range of human endeavor, including political subjects such as the Armenian Genocide, the Hungarian Revolution of 1956, and the history of book burning. In April of 2010, Andrew was named Chief Curator of the Ronald Reagan Presidential Library and Museum, a division of the National Archives and Records Administration, where he was involved with the multi-million dollar renovation of the museum’s permanent galleries in anticipation of the 100th anniversary of the birth of President Reagan in February 2011.

Andrew has given papers at various international conferences, including USC's Association of Public Diplomacy Scholars symposium, "Cultural Diplomacy: Clash or Conversation?” where he presented a paper that focused on the concept of American "degeneracy" in late 18th century Europe and how the United States used cultural exhibitions to counter jingoistic attitudes toward the young American republic. In 2009, Andrew gave a paper entitled “American Attempts at Cultural Diplomacy through International Exhibitions during the Reagan Presidency, 1981-1989” at the Culture and International History IV Conference through the Universität zu Köln.

In 2015, Rowman & Littlefield published Andrew’s book, U.S. International Exhibitions during the Cold War: Winning Hearts and Minds through Cultural Diplomacy, based on the research from his dissertation. This year, Andrew was invited to curate the exhibition, “Make-Believe America” at the Museum of Design in Atlanta (MODA), which further explores American self-representation at world’s fairs during the Cold War.

In 2015, Andrew was named Executive Director of the New Mexico History Museum and the Palace of the Governors in Santa Fe, New Mexico.

As a CPD University Fellow, Andrew promoted collaboration and dialogue between museum and public diplomacy practitioners while investigating how civic and educative programming, like exhibitions, can serve people's lives more dynamically through cultural diplomacy models.