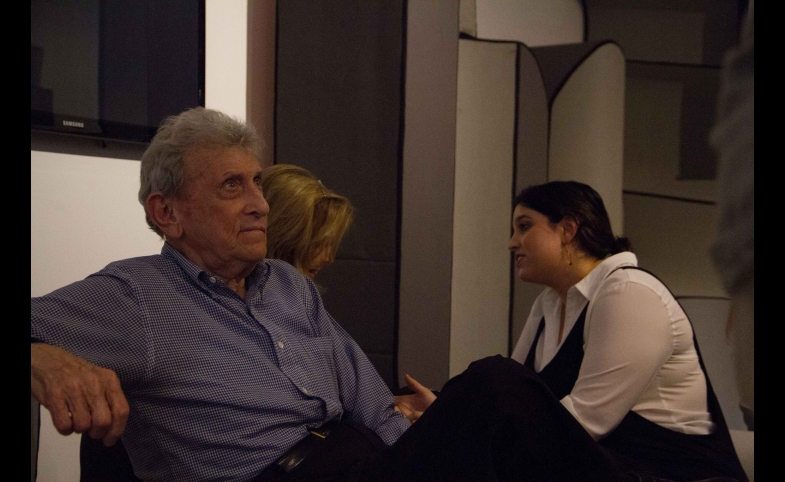 I first met Jack Masey at the George Washington University event in 2009 that marked the 50th anniversary of the American National Exhibition in Moscow. In August 2010, knee-deep in research for my dissertation on U.S. exhibitions during the Cold War, I arranged a series of interviews with Jack over the course of a few days at his design offices in New York City. My world changed forever after that meeting. As an ice-breaker, I asked him how he handled controversy in his exhibitions. He broke into a broad smile and told me the story of when his firm designed the 1990 reopening of the permanent exhibition at Ellis Island. By request of Turkish authorities who denied the historical record of the Armenian Genocide, Jack and his team reluctantly took down photos referencing that event. Never deterred, only days later he replaced these censored images by even more shocking pictures whose veracity was proven. These images stayed up. Truth (and creativity) won out.

Much has already been written about Jack since his recent passing, and of course I learned during our meeting that Jack had his start in all of this in Patton’s Ghost Army in the European theater of World War II. Jack said: “I was in this group of nuts from the camouflage corps, including Bill Blass (who read Vogue in his foxhole), Art Kane, and Ellsworth Kelly. When the war was over, none of us wanted another war. I go to New York, and Bill Blass says, Jack, if you’re looking for work, there’s a job at the Architectural Forum.”

This sort of presentation of America’s message to the world would never have happened without Jack at the helm of the USIA exhibition team.

From studying design at Yale on the GI Bill, to his days at the Forum, to the larger-than-life United States Information Agency exhibitions, Jack was a friend to so many of us. In the words of his wonderful wife and friend Beverly Payeff-Masey, “Jack was a bulldozer.” He knew Khrushchev, Nehru, Bucky Fuller, Charles and Ray Eames, and the Cambridge Seven Associates. He was everywhere at international exhibitions, behind the scenes, clearing the way for brilliant designers and architects to do their work unfettered from government policy wonks and bureaucratic decision-making. This sort of presentation of America’s message to the world would never have happened without Jack at the helm of the USIA exhibition team. During our interviews, Beverly said, “There has to be something centripetal that holds all of this together. Some thread that unifies the content.” For me, in the end, it was Jack himself, his expertise, and his partnering with the world’s greatest designers and architects—in the service of U.S. cultural diplomacy—that made all of this a reality.

For Jack, the Cold War was the perfect stage to win hearts and minds for the United States via creative avenues of marvelous design and architecture. Jack liked to joke that the way these shows came together, from New Delhi in ’55 to the Bicentennial in ’75, was “a series of happy accidents, a series of strange things that took place.” I tend to disagree with him on this one point. Jack prized above all else the power of these events to bring people from different cultures together in order to build bridges all over the world. Jack was a true human being who enjoyed a comprehensive joy for life, friendship, and creativity. Knowing him—my mentor, friend, and visionary—has made me a better one too.

Photo by Storefront for Art and Architecture I CC 2.0

Andrew Wulf
CPD Blog Contributor
Executive Director, New Mexico History Museum and the Palace of the Governors
YOU MIGHT BE INTERESTED IN...