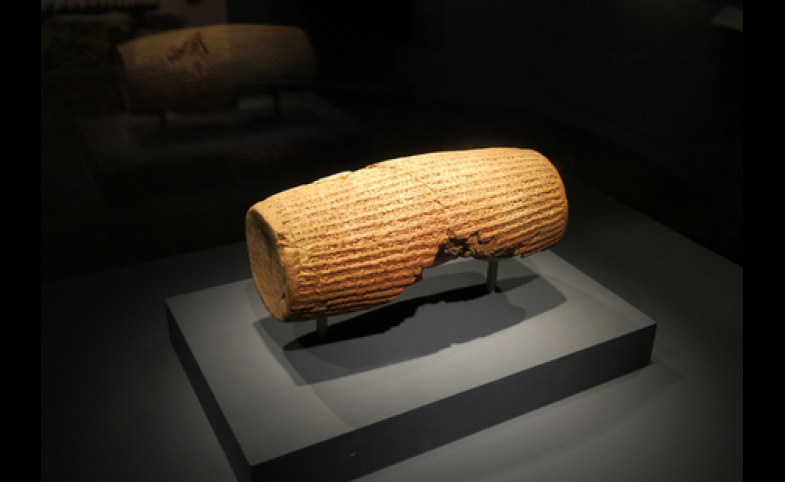 It is always heartening to hear discussion of historical artifacts not strictly as museum pieces but as instruments that can transmit other cultural messages and interpretations of identity. The Cyrus Cylinder is an example of ancient cultural heritage that resonates with new meanings today. Inspired by the blogs by Jay Wang and Naomi Leight my interest was sparked on this subject.

As an art historian and museum professional who writes on the role of artifacts and their exhibitions as conveyors of messages, whether they be propagandist or otherwise, this subject is remarkably absent from studies of the history of propaganda and its dissemination through international exhibitions. Specifically, an art historical and museological approach that takes into account the history of the display of collections in the name of national prestige or, in this case, ideological branding is lacking. Fortunately, the field of museum studies is extremely holistic and trans-disciplinary. However, studying exhibitions can be a process fraught with pitfalls. The problem with “reading” exhibitions in general is that they may not say what their makers intended. Or, the intentions may be intellectually weak.

Museum consultant Elaine Heumann Gurian frames a method for seeing the exhibition as a unified whole that takes into account the motives of the producer, the contents of the artifacts on display, and the viewer:

Further, the effort to make objects speak from the grave can frustrate what art historian Thomas Crow would call the “intelligibility” of the event. And an attempt to make simple connections between an artifact and meaning can deny the particular essence of the artifact. A potential rationale subscribed to by many art historians is to teach the reader/observer to see beyond the tendency to isomorphize the historical phenomena—of simplifying the object’s meaning by equating it with the artist or specific historical causes.

Thus, a multifaceted reading of its significance can in the end make this artifact more intelligible, as an instance of branding, as a historical statement, and so forth. In our attempt to understand the socio-political history surrounding the Cyrus Cylinder students and practitioners of diplomatic history should not shy from examples of cultural heritage that can indeed instruct and shed light on a historical significance that spans millennia, from ancient Persia to modern-day Iran.

Finally, art historian Stephen Bann calls the exercise of interpretation of singular artifacts a process by which we “measure its participation in the multiple codes which govern the collective consciousness.” Professor Simon Knell has likewise proposed an alternative—or perhaps better phrased as—a corrective to focusing solely on the “exhibition as artifact” and its composition: “So rather than reading the order, which has survived in museums to the present day...we need to uncover the ‘looking’ (the interpretive frame) of the founders.” This exhibition, then, of the Cyrus Cylinder is ultimately a complex ideological symbol in which concepts of national identity and global cultural influence both coincide and clash.

Andrew Wulf
CPD Blog Contributor
Executive Director, New Mexico History Museum and the Palace of the Governors
YOU MIGHT BE INTERESTED IN...

Simon Anholt, an independent advisor on national identity and public diplomacy known for coining the "Nation Brand," has joined forces with Harvard University's Madeleine Hung to create The Good Country. Born out of...