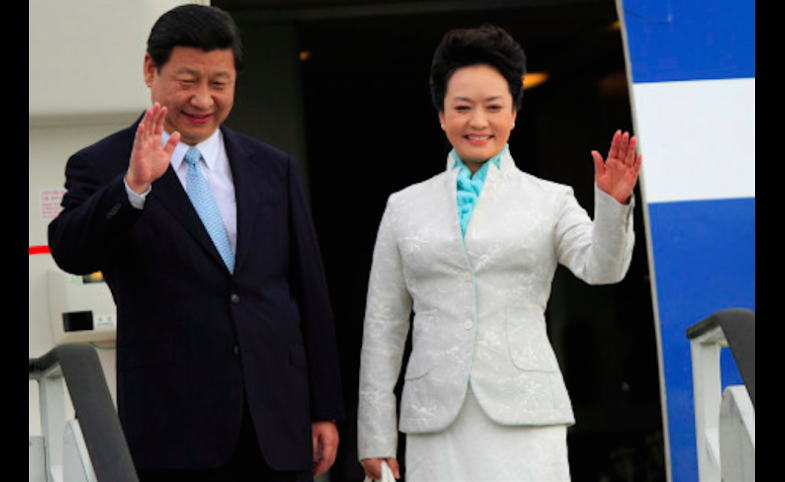 First ladies have long been an important part of a nation’s public diplomacy. Now their role is ever more pronounced. In this regard, China’s first lady invites special attention as the country actively courts international public opinion.

What is most interesting about Peng Liyuan is that, at home, her fame and celebrity long preceded her husband Chinese president Xi jinping’s. Before Mr. Xi emerged on the national scene, Ms. Peng, one of the country’s foremost folk singers, was already a household name, and her popularity has spanned the past three decades.

While there is growing recognition that Peng is a valuable asset for China’s public diplomacy, there is much less understanding of the role she can and will play.

If we take a look at the American first ladies in recent times, their role runs the gamut from "ceremonial backdrop" in the case of Laura Bush to “substantive world figure” in Hillary Clinton. Even Hillary Clinton’s first ladyship evolved over the years, from her “I-could’ve-stayed-home-and-baked-cookies” comment and her failed attempt to overhaul the nation’s health care, to a more conventional profile of championing women’s and children’s issues.

Ms. Peng has accompanied her husband on several state visits. Her presence on these trips, highly publicized in the Chinese media, represented a major shift in China’s approach as regards its first lady. But her exact role remains ambivalent. And how this will unfold will be reflective of China’s political reality as well as shaped by her own personal charisma.

In her recent video address on the naming of the giant panda cub at the National Zoo in Washington, D.C., Peng Liyuan came across as being friendly and attractive. Michelle Obama, who begins her visit to China today, also taped a video on the same occasion. Both offered messages of congratulations, and underscored the deepening collaboration and connections between the United States and China. While Michelle Obama traced the history of giant pandas in the U.S., Peng brought a more personal touch by speaking from a mother’s perspective. Her holding a panda doll while delivering her speech amplified the point. The setting of a Chinese bamboo garden in the video seemed appropriate as well. Notwithstanding a few needed production improvements, the video clearly demonstrates the growing sophistication of China’s international communication and Peng’s potential of playing a more prominent role in the country’s global outreach.

At first glance, promoting arts and culture appears a natural fit for Ms. Peng. But her artistry, Chinese folk singing, is decidedly difficult for a non-Chinese audience to appreciate or understand. Even within China, it finds a much older audience these days. The art form relies solely on vocal performance, and its tunes draw from distinct, local folk songs from various regions of China.

Like their president husbands, first ladies are increasingly expected to enter the foray of pop culture, especially when it comes to engaging with a younger demographic. Ms. Peng certainly doesn’t have the on-camera stiffness typical of many Chinese officials. But to what extent she can venture into the wider media world remains to be seen.

If Michelle Obama is, as The New York Times reporter Jennifer Steinhauer wrote, “the embodiment of the contemporary, urban, well-heeled, middle-aged American woman,” what Peng Liyuan stands for both at home and abroad is less clear. This is in fact indicative of a larger challenge facing China’s soft power efforts, as the country’s identity is in constant flux. Amidst rapid change, there has been a lack of a clear, compelling, consistent narrative about what the country represents and its global role.

While Mrs. Obama talks freely about her PTA meetings, restaurant choices, films she likes and fitness routines, we don’t know what Ms. Peng can and will share to engage the broader public. We may find out more about her as a host during Michelle Obama’s visit to China this week.

Moreover, it is important to recognize that the international image of the Chinese first lady is also a function of the changing Western perception of Chinese (or Asian) women in general. Gone are the days when the orientalist feminine mystique dominated the popular imagination, as in the case of the “beautiful, powerful, and sexy" Meiling Soong (Madame Chiang Kai-shek), who charmed a generation of Americans in the 1930s and 40s.

The primary focus of attention in first-lady diplomacy has been facilitating a meaningful, supportive climate for countries to pursue constructive relationships. This is no less important than policy advocacy. In fact, such public diplomacy is fundamental to a nation’s effectiveness in international affairs. It is increasingly doubtful that any significant foreign policy agenda can be achieved without the support of the public, especially when dealing with countries where the middle class flourishes. Indeed, given the centrality and complexity of the U.S.-China relations, first-lady diplomacy has an indispensable role in improving the bilateral ties.

Framing Chinese and U.S. Activity in Africa in Media

Chris Paterson and Toussaint Nothias, communication scholars at the University of Leeds in England, recently penned an article on the way global news media depict Chinese economic and American military involvement in Africa...