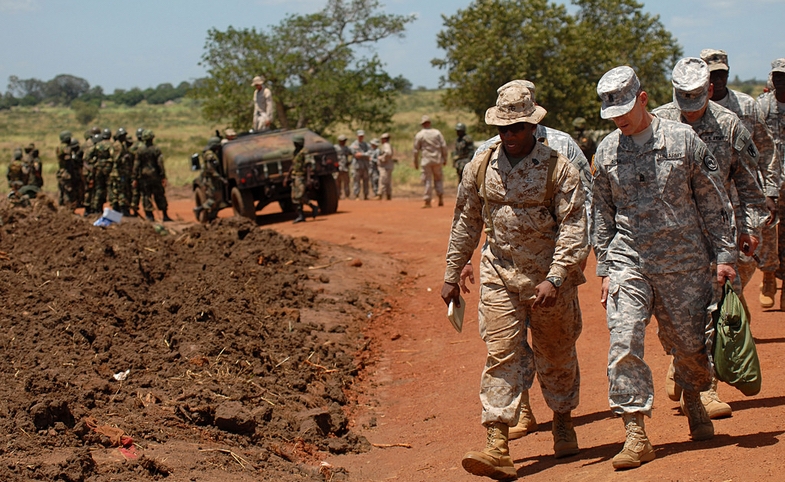 Dead service members and their families deserve recognition and respect, both from presidents and the American people. Active duty military also deserve a clear mission and the commitment of a nation to their service, fight and future.

Families of the four Green Berets killed in a Niger ambush have now received condolence calls from President Donald Trump, but a growing American military engagement in Africa calls for a complete and coherent continental policy. That call remains unanswered.

Since his inauguration, President Trump has failed to define America’s strategic interests in Africa. In fact, he’s failed to show much interest or competence in the continent, as during a short speech to African leaders last month where he called one country “Nambia” and hit a raw nerve by saying Africa was ripe for exploitation by his “many friends going to your countries trying to get rich.”

False first steps can be corrected, however. Next week’s planned visit to South Sudan and the Democratic Republic of Congo by Ambassador Nikki Haley could bring new attention and some clarity to U.S.-Africa policy, though the trip seems limited in scope and ambition. The Niger combat killing of special operations forces and the recent death of a Navy SEAL in Somalia should focus the president’s mind and be a defining moment for him to clarify Africa policy in an America First world.

Trump inherited “mission creep” in Africa. What started as slow and limited security and counterterrorism deployments by President George W. Bush were quietly, but extensively enlarged and underwritten by President Barack Obama. As a result, America is now a decade into its sixth and newest military command, AFRICOM, which has quickly gone from training national forces to traipsing into national conflicts.

AFRICOM’s original goal was a soft power oriented American military command meant to build security and bridges to African nations. In tandem with George W. Bush’s generously funded Presidential Emergency Plan For AIDS Relief (PEPFAR) program, a U.S.-friendly Africa would grow resistant and resilient to both militant radicalism and virulent disease. Trump’s all guns and no butter approach, however, is not converting African hearts and minds and instead building continental anti-Americanism.

As America deploys its special forces and drones to fight on African soil, China deploys its workers and cash to buy continent-wide popularity and political favor in places such as Ethiopia.

Ironically, a truly America First policy would dictate a lighter military touch and greater distance from Africa’s domestic difficulties. Instead, AFRICOM today exhibits a far heavier American hand. The special ops deaths indicate their mission may have been more than a military exercise.

AFRICOM’s boss General Thomas Waldhauser told military newspaper Stars and Stripes that his mission is “build defense capabilities, respond to crisis, and to deter and defeat transnational threats.” But all too often a narrow training and capacity building mission can over time and with a distracted White House turn into fighting another country’s civil wars. Does Vietnam ring a bell?

Make no mistake, terror groups in Africa are as bad as they come. They deserve to be wiped out. Truck bombs last weekend in Mogadishu killed at least 276 and injured another 300 civilians, suspected to be the horrific jihadist work of Al Shabaab. Boko Haram kidnapped the 300 Chibok girls and continues to wage a Nigerian guerrilla war. Al Qaeda in the Islamic Maghreb has found fertile ground in the north while ISIS is further wheedling its way into Africa both overland and online as it loses territory, troops and revenues from its defeats in Syria and Iraq. The collection of African bad actors is growing in numbers and lethality.

In the meantime, America is effectively ceding greater African influence and access to an assertive China that is using its money, military and labor manpower to build intercontinental infrastructure projects and deep relationships with Africa’s leadership. In fact, as America deploys its special forces and drones to fight on African soil, China deploys its workers and cash to buy continent-wide popularity and political favor in places such as Ethiopia. Militarily, China deploys naval forces safely off the coast of Africa or in its new Djibouti port, out of plain sight and away from terrorist threats.

America expended troops, time and treasure to win Iraq for the Iranians. The U.S. now runs the risk of backing into a protracted and costly fight in Africa only to pave the way for China to prance in as a preferred economic partner and political savior. An undefined long-term military investment in Africa runs the real risk of clearing the way for a China currently consolidating its power and with clearly defined neo-colonial African objectives.

African conflicts deserve attention and counterterrorism should remain a priority, but President Trump needs to make it clear both to the American people and those in uniform whether they have signed up for an escalating African war.