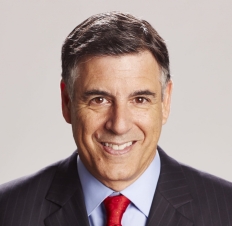 Markos Kounalakis, Ph.D. is a visiting fellow at the Hoover Institution at Stanford University and is a presidentially appointed member of the J. William Fulbright Foreign Scholarship Board.  Kounalakis is a senior fellow at the Center for Media, Data and Society at Central European University in Budapest, Hungary and president and publisher emeritus of the Washington Monthly. His current book is on the geopolitics of global news networks.

Kounalakis is a print and network broadcast journalist and author who covered wars and revolutions, both civil and technological.

He reported the overthrow of communism for Newsweek in East Germany, Czechoslovakia, Hungary, Romania, and Bulgaria and the outbreak of ethnic strife and war in Yugoslavia. He was based in Rome and Vienna and ran the magazine’s Prague bureau.

After Newsweek, he worked as the NBC Radio and Mutual News Moscow correspondent covering the fall of the Soviet Union as well as the war in Afghanistan. Kounalakis has written for The Wall Street Journal, The Los Angeles Times Magazine, the International Herald-Tribune, the San Francisco Chronicle, The Dallas Morning News, The Miami Herald, and many other regional and international newspapers and magazines.  He is currently a foreign affairs columnist for the The Sacramento Bee and McClatchy-Tribune News.

He has written four books, Defying Gravity: The Making of Newton (Beyond Words Publishing, 1993); Beyond Spin: The Power of Strategic Corporate Journalism (coauthor, Jossey-Bass Publishers, 1999); Hope is a Tattered Flag: Voices of Reason and Change for the Post-Bush Era (PoliPointPress, 2008); and Spin Wars & Spy Games: Global Media and Intelligence Gathering (Hoover Institution Press, 2018).

He was born to Greek refugees in San Francisco in 1956 and received a public education, including his undergraduate years at University of California, Berkeley (1978, Political Science). He earned his MSc in Journalism from Columbia University (1988), was a Robert Bosch Foundation Fellow in Europe (1988-89), during which time he studied at both the Bundesakademie für öffentliche Verwaltung in Bonn, Germany, and the École Nationale d'Administration in Paris. He was an international journalism graduate fellow at the University of Southern California (1995-96) and El Colegio de Mexico in Mexico City.  He did his doctoral work in political science (International Relations) at Central European University and received his PhD with highest honors (2016), graduating Summa Cum Laude.

He served as chairman of Internews Network (2002-4); vice chairman of the California State World Trade Commission (2001-3); member of the Board of Trustees of the Western Policy Center (2001-5); member of the Board of Trustees and Executive Committee of the World Affairs Council of Northern California (2006-8); and member of the National Governing Board of Common Cause (2006-8). In June 2003, he chaired a multinational reconstruction conference in Athens, Greece, at which Iraq’s media laws were drafted.

He is married to Lieutenant Governor of California Eleni Tsakopoulos Kounalakis, the lovely and talented mother of his two sons, Neo and Eon, and the former U.S. ambassador to the Republic of Hungary.

Behind the Scenes with Foreign Correspondent Markos Kounalakis, April 16. 2019.