The Power of Mothers Globally

In honor of Mother’s Day and in preparation for a speech I’m due to give to the International Women’s Festival in Accra, Ghana this week I’ve been researching the impact and role of Mothers on societies globally. The ancient Chinese proverb and title of Nick Kristof’s groundbreaking book, “Women Hold up Half the Sky” which inspired me to become more involved in women’s issues. I was also inspired by the many sharp, strong women, my “Mother Hens” that have come into my life and been a guiding force, nurturing, protecting and mentoring me since my own Mother passed away nearly 15 years ago. My Mother used to say “always listen to your Mother and your Mother Hens, they come into your life for a reason” and that being a Mother “is THE hardest job on the planet”. It’s only been in the last few years that I’ve truly come to understand and appreciate what she meant. And learn that she was right.

Per my Mother’s direction when I travel globally, I constantly seek out and actively listen to Mothers. I learn from each of them irrespective of religious differences, and deeply value their wisdom which is universal. There are myriad Women’s Initiatives happening all over the globe seeking to hold up, crystallize and build upon this wisdom and it is inspiring when you see grass-roots efforts like the International Women’s Fair in Ghana which was developed and funded locally and is engaging on issues to include Mother and Child healthcare and well-being as well as global business development for women. And oh by the way, the conference is being organized and spear-headed by a small group of forward thinking men. Men who get it. Men who are so forward thinking that they are providing a platform for leading women to share their experiences and they’ve targeted the Queen Mothers, those who are married to Chiefs and who carry extreme amounts of influence in their communities.

No matter where I travel, I am always interested in learning about the role of women and Mothers in a society. Hindu, Jewish, Christian, Muslim, Agnostic – irrespective of faith, Mothers around the world are more similar than that which separates them. They wield tremendous power oftentimes under the radar. They are at once strong, resilient, nurturing, and protective. They are more often than not excellent listeners, organizers, educators, and health practitioners with vast reservoirs of patience. No matter the religion, Mothers have a certain quality that not only binds and influences a society but that drives the development of future generations.

Women & Mothers in the Global Workforce

Many of the Mothers and women I meet around the world are incredibly entrepreneurial. Perhaps it comes from their experience dealing with the unknown and finding solutions on the fly. Perhaps it comes from societal expectations that they should do everything with nothing or under tremendous constraints. As many of my Mother Hens in Texas used to say and it’s become a mantra for me my entire life, “Women, and Mothers….know how to get sh*t done.” Give me a couple passionate, dedicated women and there isn’t anything we can’t accomplish.

I am reminded of the sessions I attended at Maria Shriver’s Annual Women’s Forum in Long Beach last fall. Here were 15,000 women all under one roof – the positive energy was palpable. Every major female role model you can imagine was there speaking – from First Lady Michelle Obama to Justices Ruth Bader Ginsberg and Sandra Day O’Conner. One of the breakout sessions focused on women CEOs and it was one of the most candid exchanges I have ever witnessed. Five current and former CEOs sharing their challenges in raising families and companies in traditionally male dominated industries. I loved how they all agreed that at the end of the day their keys to success stemmed from many of the traits they gained as Mothers – knowing how to prioritize, empathize, build a team and make the tough decisions to get the job done. And they admitted that even though they had reached the top, they never stopped learning and listening.

As a senior executive once shared, “I wish Mothers ran all of my companies. They have a holistic view of the world and a unique skillset which isn’t often leveraged or appreciated by senior managers. Their ability to handle crises, manage conflict, and thrive in chaos is essential for global business. Many Mothers opt out at the senior executive levels so now the challenge is in finding ways to keep them. We need Mothers in our businesses now more than ever before.”

There are increasingly more and more women in business, particularly entrepreneurs. If only there were more women engaged in the art of diplomacy and at work in every level of our Federal Government. I remember well when I began at the State Department years ago how few women there were posted as Ambassadors, foreign service officers, or in key senior posts at Main State. It is heartening to now see such strong, powerful accomplished women in key leadership roles at the Department – from Secretary Clinton to Ambassador Verveer on Global Women’s Initiatives, Under Secretary McHale for Public Diplomacy, and Ambassador Elizabeth Bagley on Global Engagement. My hope is that irrespective of Administration we start having more women not only in these key positions but also throughout the diplomatic ranks.

I am sure that if the mothers of various nations could meet, there would be no more wars.  -- E. M. Forster

How are Mothers fairing globally? With all of the increased attention and funding for women’s issues, especially by governments and prominent NGOs, many global challenges persist. Save the Children’s twelfth annual Mothers’ Index 2011 outlines many of these challenges and compares the well-being of mothers and children in 164 countries. Countries are ranked on issues ranging from Mothers’ and children’s health, to educational and economic status. The report is incredibly well written and includes several awesome essays from unlikely authors ranging from Anne Mulcahy, former CEO of Xerox to Retired Army Colonel and Counter-Insurgency expert John Agoglia to actress Jennifer Garner, mother and Artist Ambassador for Save the Children. There is much progress, but much work yet to be done. 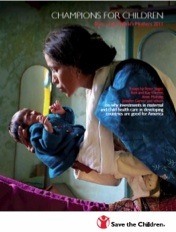 Findings from the SOW Mothers 2011 Report:

You Can’t Be Successful Globally Without This…

Contextual Intelligence.  Often overlooked and rarely explored in global leadership programs, contextual intelligence is essential in an international environment as individuals and organizations must learn to adjust...

The Madam Wears Pant Suits I had just arrived in London, December 2008. I was jetlagged and exhausted but excited as I was due to attend a conference at Ditchley Park . Ditchley is a very special place for those...

The Road to 100,000: A Music Video as Strategic Communication

APDS Blogger: Gabriel Bernadett-Shapiro In October, I had the opportunity to take part in a unique project; creating a music video for a social action campaign. The project emerged from several conversations with fellow...