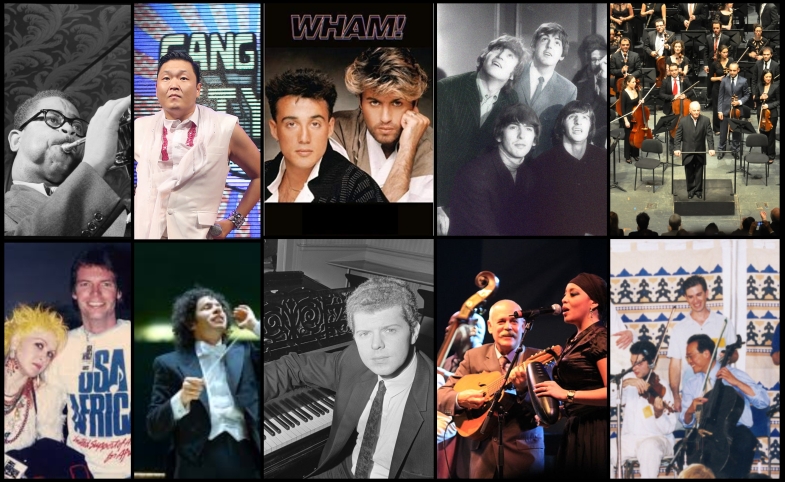 Music is a powerful mechanism for self-expression, social activism and public diplomacy. Talented musicians around the world have produced and performed seminal works of art that have both facilitated cross-cultural understanding and promoted a message of peace. Below is CPD’s curated list of some of the most notable examples of music diplomacy from the past century in chronological order. We welcome your picks in the comments section.

The U.S. Jazz Ambassadors
Sponsored by the U.S. State Department from the 1950’s to the late 1970’s, jazz legends such as Dizzy Gillespie and Louis Armstrong brought American culture to the Russian/Soviet publics, and helped create cross-cultural understanding in the middle of the Cold War. Dave Brubeck Takes Five here.

The Beatles on Our World
Broadcast in 1967, Our World was the first live television special and featured artists ranging from The Beatles to Maria Callas from fourteen different countries across five continents. In an effort to promote a peaceful philosophy in the midst of the Vietnam War, The Beatles wrote and performed “All You Need Is Love.” The broadcast boasted the largest TV audience to-date with an estimated 400 million people tuning in around the world.

Wham!: Freedom Tour Goes to China
Wham!’s 1984 performance in Beijing was China’s first western pop concert. Despite a lukewarm reception from the audience, this exposure to the Brit-duo was a significant moment in UK-China cultural exchange. The documentary Foreign Skies presents footage of this historic trip.

"We Are The World” by USA for Africa
Recorded in 1985 by the supergroup USA for Africa, this charity single was created to raise money for African famine relief. It was released shortly after the British supergroup Band Aid produced “Do They Know It’s Christmas?” for the same cause. This was recently re-released (not without criticism) by a new generation of British recording artists (Band Aid 30) in aid of the Ebola crisis.

Cuba’s Buena Vista Social Club Come to the U.S.
Havana-based Buena Vista Social Club’s 1997 album celebrating Cuba’s golden age of music, was an international hit, inspiring a documentary on their work and renewing global interest in Cuban music. This video shows their performance of “Chan Chan” at Carnegie Hall interspersed with footage of the band in their homeland.

West-Eastern Divan Orchestra at Carnegie Hall
Jointly founded in 1999 by Argentine-Israeli pianist and conductor Daniel Barenboim and the late Palestinian-American scholar Edward Said, this initiative brings together young classical musicians from Israel, the Palestinian territories and Arab countries to promote mutual understanding and facilitate a resolution to the Arab-Israeli conflict.

The Silk Road Ensemble: Arabian Waltz
This musical collective of musicians from Eurasian cultures was established by Chinese-American cellist Yo-Yo Ma in 2000 and has performed in various locations along the historic Silk Road, including Iran, Armenia, Azerbaijan, Kazakhstan, India, the Kyrgyz Republic and Tajikistan. "Arabian Waltz" featured here was created by Lebanese-born composer Rabih Abou-Khalil.

“Gangnam Style” by Psy
The video for Psy’s K-pop single released in 2012 is the most-watched video in YouTube history, suggesting that Korea has a powerful new source of soft power in its toolbox. The song topped the music charts of over 30 countries, while its accompanying dance moves were attempted by numerous world leaders including Barack Obama and UN Secretary General Ban Ki-moon who dubbed the song a “force for world peace.”

From:
@Jordiarrufat: The Beatles' "Back in the USSR"
@artistofideas: Billy Joel's Matter of Trust Tour to Russia
@ConGenTom: "Tears Are Not Enough", 1985 by Canadian artists for Ethiopia http://youtu.be/VJN3u1wAWIk
@levantine18: Well..Bruce Springsteen won the ColdWar, that should count 4something! http://www.nj.com/entertainment/music/index.ssf/2013/07/rocking_the_wall...

You describe the Wham tour as exposure to American popular culture. Wham was a British duo. Their form of pop was a much British and American. "We are the World" was inspired by Bob Geldof's "Do they knows it's Christmas time?" Why not list that instead of the American response? What about Paul Simon's "Graceland" album that introduced millions of people to beauty of music from South Africa and helped contribute to positive change.

Wham's Britishness is of no dispute - we will fix that error right away! Paul Simon - what a great addition! The list is by no means comprehensive, which is why we're seeking input. Thanks for yours!

I believe the Grateful Dead got the backing of the US and Egyptian (Mrs. Sadat) govts to play at the Pyramids at Giza in 1978.

Tommy Watts: The list is good but, what about the hip hop ambassadors. I also got to say the "do they know it's Christmas" song had criticism because it was incredibly insulting and the version for Ebola was no better.

George Harrison went to Bangladesh to help the famine effort. There is self-titled song called Bangladesh.

As this list was published, the first concert by an American musician took place in Iran since the 1979 revolution: http://www.nytimes.com/2015/02/24/world/rebirth-of-the-cool-american-mus...

What should be included here is the Artistic Ambassador Program OF THE 1980's founded at the United States Information Agency. For seven brief and shining years through that agency and program, the United States government,after live audtions in the fifty states, sent pianists and chamber groups around the world on concert tours to 63 nations as cultural ambassadors. Also included were the commissioning of works by American composers as an instrument of national policy (archive of these manuscripts resides in the Library of Congress.)