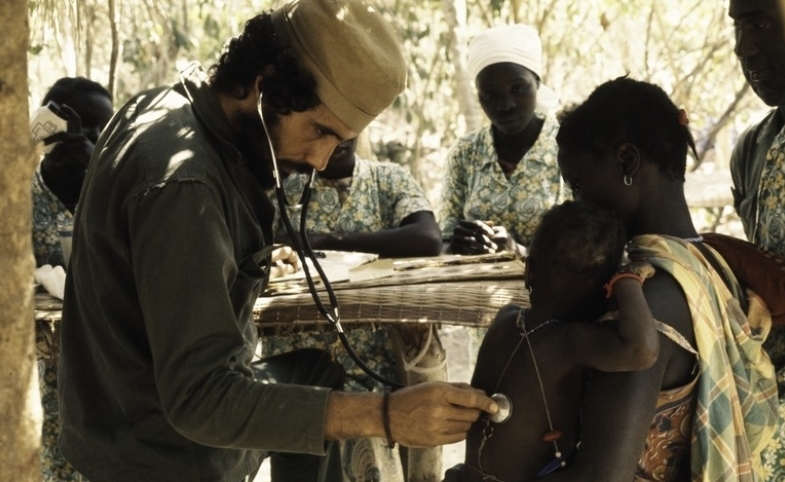 Despite having turned into a Soviet subordinate and a repressive dictatorship at home, post-revolutionary Cuba is an excellent case study of a country that embarked in successful public diplomacy abroad. Cuba’s early soft power initiatives solidified the island’s image of solidarity and cultural excellence, an image that captivates a foreign audience to this day.

If analyzed in a historical context—through the lens of the developing world and without cynicism over Castro’s motivations—it is clear that Cuba’s platform of humanitarian goodwill helped the country gain a positive international image.

During its first three decades, Cuban foreign policy managed to fulfill its sociopolitical goals and to turn the small Caribbean island into an influential actor on a global stage dominated by the Cold War.

If analyzed in a historical context—through the lens of the developing world and without cynicism over Castro’s motivations—it is clear that Cuba’s platform of humanitarian goodwill helped the country gain a positive international image.

The 1960s witnessed both an increase in Cuban antagonism toward the hegemonic powers of the United States as well as the beginning of the island’s unambiguously socialist agenda of internationalist solidarity. Washington’s economic blockade was partly to blame for Cuba’s economic partnership with the Soviet Union.

As a result, Cuba solidified its commitment to the communist cause and to revolutionary movements across Africa and Latin America. The following decades saw some of this commitment reflected in the form of military assistance that led to victories in Angola and Ethiopia. But also during this time, an important legacy was built in the realms of soft power through Cuba’s medical, educational and cultural diplomacy.

Shortly after the revolution, Castro sent physicians and health workers to Algeria as a sign of revolutionary solidarity and to Chile as part of a relief effort in the aftermath of an earthquake. This marked the beginning of Cuba’s Plan Fidel of medical support programs in developing countries. These programs saw a dramatic increase in the mid to late 1970s and became Cuba’s greatest export—what the New York Times in 1985 called, “perhaps the largest Peace Corps style program of civilian aid in the world.”

In two decades, tens of thousands of Cuban health workers donated their services abroad, at times surpassing the number of doctors working internationally with the World Health Organization. Cuban medical diplomacy—an extension of the island’s domestic healthcare policies—portrayed a sincere concern for improving people’s lives, and its efforts received worldwide praise from entities like the United Nations.

Again during the 1970s, the Cuban government promoted what, according to Castro, was an “educational revolution.” Cuba enacted corrective measures in the curricula and the teaching-learning strategies of its educational system in order to tackle the high dropout and low enrollment rates of the past (fast-forward to 2015, and Cuba ranks the highest in UNESCO’s Education For All development index in Latin America and the Caribbean).

Scholarship programs offering a free high-quality education encompassed the government’s soft power approach to attract foreign students from the developing world, such as Angola, Burkina Faso, Ethiopia, Bolivia, Nicaragua and North Korea. Students, regardless of their country’s political stances, were able to pursue a Cuban education in applied fields that reflected the needs of the third world. Even students from developed nations were accepted on a financial need basis. Cuba’s education diplomacy at home paralleled their health advancements abroad.

This uniquely Cuban education-health complex matured into a model of inspiration for other countries and into a source of well-educated and highly skilled manpower that represented the humanist values of Cuba’s internationalist foreign policy.

Culture also played an important role in the post-revolutionary period. Film and music served as important instruments in Castro’s foreign policy toolbox. Although Cuban cultural authorities screened films’ narratives, filmmakers had a degree of flexibility that allowed them to gain worldwide recognition while serving the country’s revolutionary aims.

An important aspect of Cuban public diplomacy to take into consideration is its narrative of victimization. This narrative stemmed from defiance to the United States’ destabilizing efforts and facilitated the creation of a Cuban brand of resistance against imperialism. On the other hand, the Cuban threat to U.S. hegemony was a symbolic one that wasn’t taken seriously by the international community. This imbalance of power and a legitimate Cuban concern effected global sympathy for the island’s struggles.

Castro’s autocratic leadership was one of top-down paternalism with the Cuban poor. But, the horizontality of his South-South public diplomacy is indubitable—his initiatives received broad international recognition. Listening to the needs of the southern hemisphere allowed Cuba to customize its outgoing aid. Through education exchanges, Cuba strengthened diplomatic relationships with the developing world that increased commerce and goodwill. Advocacy of the revolutionary principles inspired the global left, and international exposure to Cuban culture brought the concept of cubanidad to a foreign public. Symbolic capital was converted into hard capital, and human investment translated into revenue.

It is clear that Castro’s soft power achieved its social goals and boosted Cuba’s international image. Despite extremely limited resources and a democratic deficit at home, this lasting image of international solidarity and rich culture presently anchors the Cuban people as they transition to a post-Castro Cuba.

The State, Cuban Rap, and the State of Cuban Rap

The year is 1999. Cuban rappers are barred from performing in Havana’s club scene, shows are broken up by force, and the government denounces the art form as “Americanizing.” 2002 is a different world. Fidel Castro calls...

From Afro-Peru to the World

Much of Peru's cultural legacy is owed to the country's rich African roots. Since reappraisal of Afro-Peruvian roots during the 1970s, the international music circuit has been been fascinated by the sounds coming from...