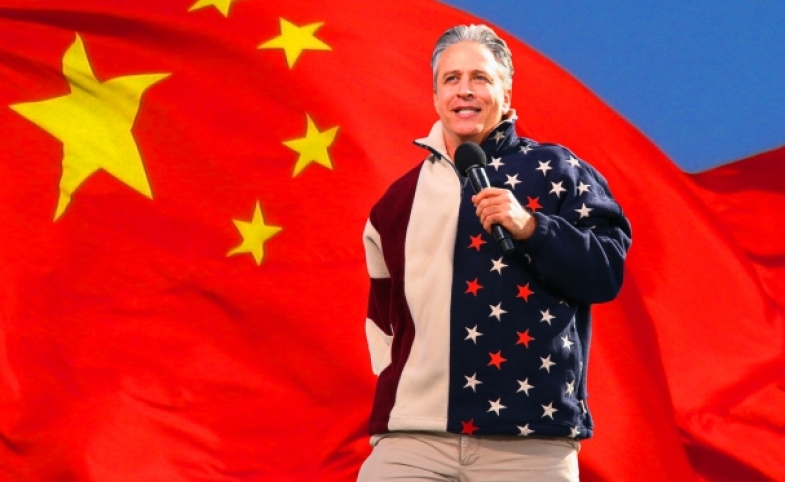 The Daily Show Goes to China

With 1.3 million followers on his Weibo account (the Chinese equivalent of Twitter), Gudabaihua (谷大白话) is one of China’s most prominent translators of American late-night talk shows. The subtitled video clips he produces regularly get millions of hits. Gudabaihua is credited with spreading many Internet memes associated with late-night talk shows, and for promoting the overall popularity of this genre in China.

In an interview with Chaoran Liu, a USC Annenberg graduate student, Gudabaihua spoke about the role and influence of American talk shows in China. The interview, conducted on December 2, 2013, was part of Liu’s graduate thesis. Edited Excerpts:

CHAORAN LIU: How were you first exposed to American late-night talk shows?

GUDABAIHUA: The first time I watched late-night talk shows was seven years ago. Like many millennial college students, I enjoyed playing basketball, online gaming, and watching American television. And like them, I watched those programs through various BitTorrent websites, both domestic and abroad. Having watched a number of TV series, I was then exposed to the Oscar Awards of TV series, the Emmys. For many years, I thought that each award would go to different people at different times. But to my surprise, the “Outstanding Variety, Music, or Comedy Series” category was hogged by the same winner for years in a row. Curious, I tracked down the program to see what it was all about. I was impressed by such trenchant and smart comedy after watching several episodes, and then it became my all-time favorite. The comedy program was none other than The Daily Show with Jon Stewart.

CL: What are some of the difficulties you have encountered in translating late-night talk show programs?

The other obstacle was accent. Talk show hosts, for the sake of parody, often imitate different accents. For example, Stewart likes to imitate Jewish and New Jersey accents; Craig Ferguson often imitates British accents; Jay Leno imitates Arnold Schwarzenegger; Jimmy Fallon imitates all kinds of celebrities. Some hosts themselves have accents: Craig Ferguson has a Scottish accent, and John Oliver has a British accent. Guests can be a problem, too: Egyptian, Indian, Pakistani accents are very difficult for me to understand.

And then there is the problem of slang, which I find very hard to understand, especially when they function as puns and homonyms. An example would be a punchline like "a Democrat sucks, and a Republican blows." Understanding why such punchlines are funny requires a large slang vocabulary, and preserving the humor while translating them into Chinese compounds the difficulty.

The other challenge was the American cultural background that involves history, current affairs, politics, movies, literature, gossip, and all sorts of subjects. Historical examples include former Vice President Dan Quayle misspelling the word "potato" and President George H.W. Bush vomiting on the Japanese Prime Minister. As for current affairs, there's the scandal of Toronto mayor Rob Ford and political divisiveness between Republicans and Democrats over health care. Another example of a difficult cultural reference was a Daily Show report on the death of Bin Laden called "Hairy Plotter and the Deathly Hello," a parody of the book title Harry Potter and the Deathly Hallows. The only way to work through these challenges is by the slow accumulation of knowledge.

CL: What do you think explains the popularity of The Daily Show among Chinese audiences?

G: First, Stewart looks handsome. A number of female fans are drawn to Stewart for his looks.

Second, standard talk show monologues are composed of shorter jokes, which are usually far too frequent and unfamiliar to strike a chord with the Chinese audience, because they are more comfortable with dealing with contextualized comedy, such as cross talks (a traditional Chinese form of comedic performance typically with two performers. Jokes during monologues are only about 30 seconds long, so many Chinese viewers find it hard to keep up. There is also the problem of understanding cultural references. Explanatory captions can be helpful, but talk show jokes are often too short for a caption to fully explain them.

However, Stewart often stays on the same topic for eight minutes or so, so he is able to explain the context of what he’s discussing. When background information is laid out like this, a Chinese audience has a better chance of understanding the whole thing. Sometimes Stewart interacts with the so-called “senior correspondents,” and the conversations and storylines these correspondents produce make sense to Chinese audiences.

Third, Stewart shows no mercy in railing against the bad guys. Standard jokes fall short in their ability to delve into issues due to time limitations. And broadcast network talk show programs such as The Tonight Show have to play it safe by catering to people of different age groups and political ideologies: expletives are avoided, offensive words are euphemized, and controversies are shunned. Yet Comedy Central, being a cable network, carries no such burden, as demonstrated by South Park. Bleeped-out expletives and controversial stances are common features on Stewart’s show, and his political satire can be over the top sometimes. HBO’s Bill Maher doesn’t even bleep out the dirty words, yet his biting remarks might be too much for Chinese audiences.

Lastly, Stewart’s show often features topics that Chinese people are into, such as the presidential elections, the government shutdown, and the London Olympics.

CL: How do you think the rising popularity of American talk shows has influenced Chinese audiences?

G: First, many viewers’ tolerance of political incorrectness is greater once they realize that almost everybody in the world has, at one point or another, been the laughingstock of American talk shows. It has gradually dawned on the Chinese audience that talk shows do not claim to be serious news reporting, but are in fact a form of entertainment that caters to the taste of low-, middle-, and high-brow audiences.

Second, these shows present a real America to the Chinese public. American talk shows have provided an opportunity to see America at its best, as well as at its worst. And many have come to understand that America is a diverse and multi-faceted entity, instead of a perfect heaven or a veritable hell, as so many claim on the Internet.

Third, the Chinese are increasingly interested in American politics and current affairs, thanks to these programs’ focus on elections. Many netizens showed considerable knowledge about U.S. Presidential candidates, in my observation.

CL: In general, what is the Chinese audience’s take on negative reports related to China?

G: The talk show sphere has generally two approaches when it comes to China. One is the use of stereotypes in jokes, for example, Colbert likes to imitate a Chinese accent, and Conan and Leno are fond of making fun of child labor. The other approach is to capitalize on the country’s growing influence. Stewart, Kimmel, and others never get tired of referring to China’s status as the largest creditor nation.

Colbert and Stewart’s shows sometimes feature full-length negative reports on China, and such content is generally accepted by the Chinese audience. For example, Chinese viewers often write comments agreeing with parodies about the smog in Beijing.

Charon Liu is an international student from China and candidate for a Master in Strategic Public Relations at the Annenberg School for Communication and Journalism at the University of Southern California. This interview is an excerpt from his graduate thesis titled Review and Analysis of the Past, Present and Future of American Talk Shows in China Based on The Daily Show experience.

Beyoncé and Jay Z are proving that America has the diversity and creativity to survive the new China challenge. The musical duo inspires a new generation, shows America’s cultural strength, resilience and power—and just may...

Professors Shumin Su (Beijing International Studies University, China) and Mark Xu (University of Portsmouth, UK) have published a new article in the January-March 2015 issue of the International Journal of E-Politics. ...