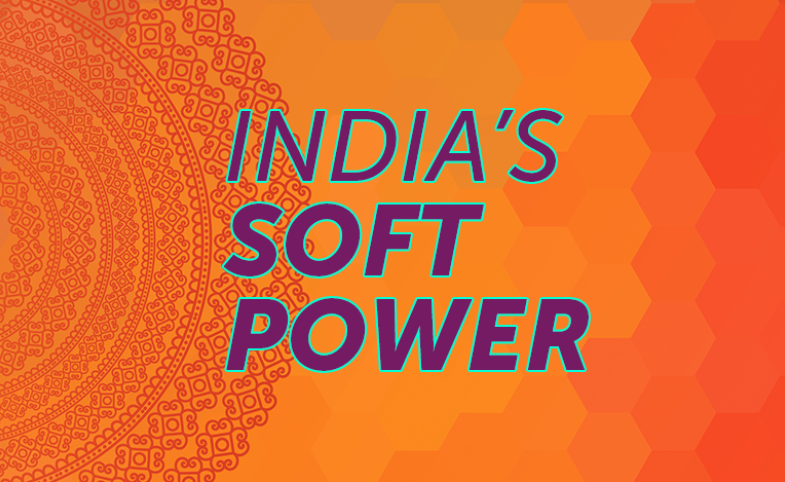 In December 2018, CPD served as primary academic partner for India's first major Conference on Soft Power, hosted by the India Foundation in New Delhi. The three-day conference hosted speakers from industries essential to Indian culture nationally and abroad. They discussed how India can capitalize on its unique customs and cultural hallmarks to create a strong national brand to shape the country's future on the world stage.

Some of the most powerful Indian cultural assets are textiles, dance and of course, yoga. CPD Graduate Student Journalism Fellow Austin Maddox sat down with three Indian thought-leaders in these fields about India's national brand and how the country can achieve its soft power goals.

Textile craftsmanship is one of the oldest Indian traditions that conveys “cultural motifs and patterns from all the cultures of the neighboring countries and its invaders,” said panelist Gaia Franchetti, owner of IndoRoman, a company that showcases and distributes Indian fabrics and designs. The "Art, Craft and Design" panel discussed how this industry can further develop itself as a soft power for India globally.

Artist and fashion designer Shelly Jyoti believes India’s history and future is carried in its textiles. In her designs and installations, she explores “the idea of our nation's soft power of culture and political values within Gandhi's thought leadership impacting India and the world.” She says much of India’s potential as a soft power has yet to be seen, and she hopes that art will continue to play a role in India’s national branding.

CPD took a few minutes with Jyoti to get an insider's view of Indian soft power through arts, craft and design:

The panel also addressed stereotypes about Indian clothing with speaker Valerie Wilson. Wilson spoke about some of the barriers she faced when bringing Indian textiles and fashion to her home country of Australia. In the process, she learned about negative perceptions about Indian clothing: they don’t fit well, aren’t durable and are for hippies. She worked to fight these misconceptions with her brand Moti by fusing modern design and branding with traditional Indian textiles.

Though they came from different backgrounds, each speaker on the panel agreed that India's Khadi textile designs carry the history of Indian independence and are a huge aspect of India’s political ideology that much of the world has yet to understand.

Yoga is one of India’s greatest cultural exports that has made an undeniable global impact. Speakers on the yoga panel demonstrated how the practice can continue to be a soft power while channeling India’s national story.

The first presenter was Gopi Kallayil, Chief Evangelist of Brand Marketing at Google, who spoke about his success mixing the growing tech culture with yoga by bringing free yoga lessons to about 70% of all Google offices. He is now focused on getting his colleagues “to understand more dimensions of yoga” by taking them to various Ashrams—Hindu spiritual retreat centers—to practice in a more traditional setting.

CPD chatted with Kallayil about his unique approach to integrating India's soft power into the workplace:

Panelists consisted of people from all over the world, like Nouf Marwaai, Saudi Arabia’s first yoga instructor, and Suhag Shukla, the American-born director of the Hindu American Foundation.

Similar to Kallayil, Shukla argued that maintaining the foundations of yoga is crucial to its use as “the ultimate Indian soft power.” She recommends de-stigmatizing the word “Hindu” to “maintain a balance between the sacred and the secular” that will preserve yoga’s roots and extract the full soft power potential of yoga.

Indian dance has made a name for itself globally within the context of Bollywood dance numbers, but there is much more to Indian dance than what’s seen on the big screen. Panelists on the performing arts panel agreed that dance has untapped potential, and more investment would allow dance to become a stronger soft power for India.

Actor, dancer and instructor Rukmini Vijayakumar directed the panel to discuss how dance could serve in a culturally diplomatic role for India.

Similarly, Mira Kaushik, Director of Akademi London, a dance studio, emphasized that that Indian dance has gone global and “redefined parameters of the art form.” However, she says order to take dance to the next level, leaders of the dance industry must start comparing cultural solutions with other nations. Kaushik also suggested establishing a national school of dance or repertory in India, so that Indians interested in dance can have a place to study the art form professionally.

Panelist Jonathan Hollander agreed that more investment in dance from the state would allow the art form to reach its full capacity. Hollander, who is the director of Battery Dance in New York, is exposing the diverse community in New York to the numerous variations of Indian dance by way of training and traditional-style performances. He said the universal nature of dance allows a natural “translation into tool of a cultural diplomacy.”

India's rapidly growing economy and its role in the rise of Asia in world politics have created a strong backing for its emerging focus on soft power. The India Foundation Journal's latest issue recaps the country's...