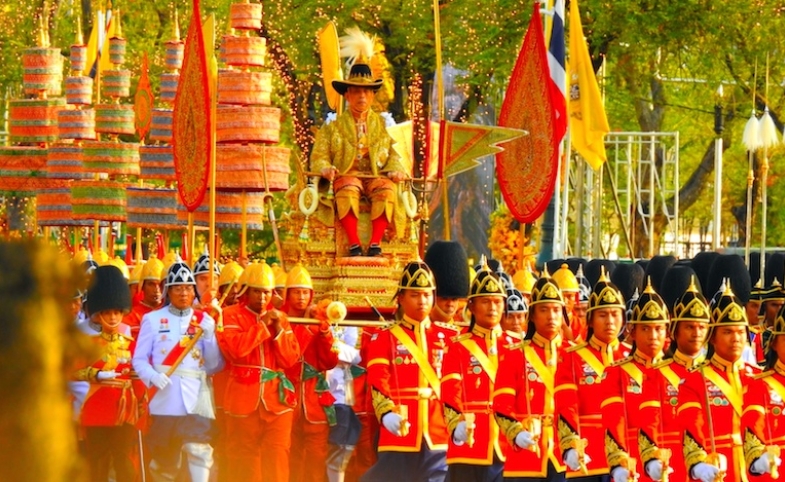 In a recent interview published by India’s public service broadcaster DD News, Sanskrit scholar Professor Chirapat Prapandvidya, from Thailand, exclaimed, “Thailand is the most crucial place for study of Sanskrit. We started to study Sanskrit long back. Hinduism and Buddhism existed in Thailand and have very strong influences. The influence of Sanskrit in Thai life is very strong and is intact. ”

Prof. Prapandvidya, who was also a speaker at the India Foundation’s Conference on Soft Power held in December 2018, is an archaeologist by profession. He has dedicated his entire life to the study and propagation of Sanskrit in Thailand. He continues to teach Sanskrit to the youth of Thailand, and he was the first to conceive both a post-graduate course and a PhD course in Sanskrit. He has also archived every inscription relating to the historicity of Indians who have visited Thailand. Prof. Prapandvidya continues to inspire scores of youth in Thailand, thereby bringing Thailand and India closer.

India and Thailand have over a millennia-old religious, cultural and trade links; these links have been concrete enablers of cultural and public diplomacy contributing to the convergence of New Delhi’s “Act East Policy” and Bangkok’s “Look West Policy.”

As the world’s focus shifts from the British royal family to Thai royal family, Thailand has just recently witnessed the coronation of its first monarch since the people’s king, King Bhumibol, who ruled over Thailand for an exceptionally long duration. The elaborate coronation of King Vajiralongkorn that took place over three days, from May 4 to 6, in the capital Bangkok saw many Buddhist and Hindu rituals performed in the month leading up to the event. The 66-year-old King Vajiralongkorn became Thailand's constitutional monarch after the death of his father, King Bhumibol Adulyadej, in 2016 following a 70-year rule.

In what is rare footage released by Thai film archivists, glimpses of the 1950 coronation of King Bhumibol Adulyadej show him pouring sacred water on himself as part of the purification process, soon after which he wears the crown. Available reports state that the use of water is based on a Hindu tradition that dates back to 18th century coronation ceremonies, since the founding of the Chakri dynasty.

To date, the special relationship between India and Thailand exists and is there for all to see. This bond has been carefully preserved and carried forward for generations together, so much so that it plays an integral part in the anointment of the King of Thailand, even today.

Hindu touches of Thai coronation are not new. In ancient India, Rajabhisheka referred to the coronation of ordinary kings. “For the Siamese, Rajabhisheka is rather a Rajasuya, a ceremony for the consecration of an emperor, and it is extremely interesting to find that some of its features can be traced back to the Vedic Rajasuya described in the Satapatha Brahmana,” wrote author Horace Geoffrey Quaritch Wales, advisor of Siamese King Rama VI and Rama VII.

Pertinent here also is the fact that the Thai royal family has never let a ritual in their family be performed without the presence of Indian priests or those who have learned the hymns in Sanskrit and Tamil. “Thai priests have been taught Sanskrit and Tamil hymns, including Thiruppavai and Thiruvempavai,” said Krongkanit Rakcharoen, the former Consul-General of the Royal Thai Consulate-General in Chennai. “Over a period of time, these hymns formed a salient feature of Thai rituals. The monarchy in Thailand reveres these Indian priests, and no ritual is performed without their presence.”

The similarities between Indian and Thai culture are not restricted to the Royal family and do not stop there. The Island of Phuket has a long-recorded history dating back to 1025 CE, which indicates that the island's present-day name derives its meaning from the Tamil word manikram (crystal mountain), which is equivalent to the Thai words phu meaning “mountain,” and ket meaning “jewel.”

Admiration for Indian deities is perhaps engrained in Thai culture. Dr. Padma Subramaniam, who has honed herself not just as an performing artist but also as an academic, in an interview described, “Once in Thailand, I was invited to the puja room of the Royal Thai Opera and there I saw masks of four deities being worshipped—Brahma, Vishnu, Mahesh and Bharatamuni.”

Another striking example is that of the Si Thep Historical Park in Phetchabun's Si Thep district, for which the Thai authorities are striving hard that it be declared a UNESCO world heritage site. Architecture at the site is a mixture of the Buddhism-based culture of the Dvaravati kingdom and Khmer culture, which draws on Hinduism and Mahayana Buddhism.

This civilizational base on which India-Thailand relations have consistently been nurtured, is a true testament to the countless similarities that exist between both countries. Be it Hinduism or Buddhism; be it any branch of Buddhism or even Indian epics like Ramayana, all have had a deep profound impact in the milieu of Thailand. It will not stop at just one Prof. Pranpandvidya; there will be many more such scholars and ambassadors for India who will emerge from the beautiful country of Thailand.

This significant cultural exchange is not a one-way street. In March, Delhi’s Namaste Thailand Festival was organized by the Royal Thai Embassy and showcases many aspects of Thai culture to Indians. This year’s festival also featured the popular folk jazz music band, Asia 7, from Thailand.

While there is much more to achieve, trade relations between the countries have witnessed a steady rise between 2017 and 2018; bilateral trade has witnessed an increase of 30 percent. An interesting annual study brought out by the North American Cultural Diplomacy Initiative has asserted how aspects such as cultural diplomacy and soft power can catapult enhanced bilateral trade. Historically, too, it is trade that actually played an important role in the expanse of India’s culture reaching the shores of Southeast Asia.

The deep significance that India attaches to Thailand was discernible when Prime Minister Narendra Modi, en route to Japan, stopped in Bangkok to pay homage to late King Bhumibol, in November 2016. Describing King Bhumibol as a “world statesman,” PM Modi said, “His Majesty will always be remembered for his compassion, foresight and commitment for the welfare of his people. His departure from this world is also a loss for the international community.”

As cultural commentator Tiffany Jenkins once put it, “The value of the arts, the quality of a play or a painting, is not measurable. You could put all sorts of data into a machine: dates, colours, images, box office receipts, and none of it could explain what the artwork is, what it means, and why it is powerful.”

To date, the special relationship between India and Thailand exists and is there for all to see. This bond has been carefully preserved and carried forward for generations together, so much so that it plays an integral part in the anointment of the King of Thailand, even today.

Traditionally, soft power ties have strengthened strong civilizational links between India and Thailand. There are a number of forms of Indian literature that have influenced Thai culture. It was a means for India to forge ties with Thailand and the larger ASEAN region, and these ties will only grow with contemporary relevance. Recently the ASEAN member countries in Bangkok proposed a distinct outlook toward cooperation in the Indo-Pacific region, and vibrant soft power ties will only enable this key objective bringing India, Thailand and the ASEAN more closer in the economically powerful Indo-Pacific region.

Arguably, few phrases are as misused in international relations as "soft power." When he coined the term, Joseph Nye captured the important and (at the time) poorly studied phenomenon in international affairs of “getting...