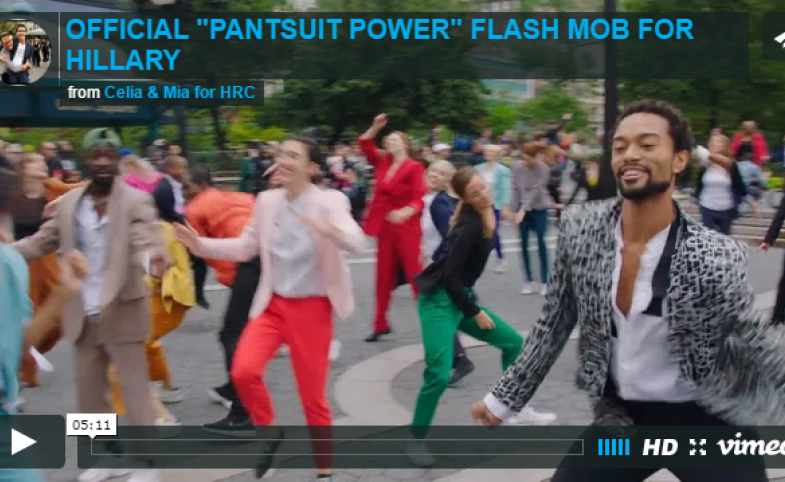 Dance is rarely used as a political tool, but the recent video from Humanity for Hillary is showing otherwise. New York-based choreographer Celia Rowlson-Hall, together with her D.C. colleague Crishon Landers, sketched out a flashmob idea in about four hours, and took to Facebook and Instagram to recruit dancers. Responses poured in from all over the U.S., and even from outside of it. Some came from the professional world, while others were just dance enthusiasts passionate about the project. And yet on October 2nd, having only rehearsed together once, they took to New York's Union Square to tell a story of diversity, community, and political solidarity.

Rowlson-Hall and Landers drew from hiphop, ballet, and modern dance, aiming to capture various elements of the Clinton campaign. Raised fists signify #BlackLivesMatter, arms and faces tilted to the sky represent solar energy, and circling hips symbolize reproductive rights. At one point, half the dancers stand with a hand on their hearts while the other half take a knee, evoking Colin Kaepernick’s protest against police brutality. And of course, all 170 dancers were decked out in pantsuits, in tribute to Clinton’s trademark workwear.

“I wanted to bring some kind of humanity to her campaign, because I think humanity and love and humor tend to get lost when we’re in the heat of all of this,” Rowlson-Hall said of the project. With over 2 million views and shares across social media worldwide in less than a week, the video has been a resounding success. In a time when the world's impression of the American election is largely negative, these dancers have showcased American creativity, cooperation, and positivity about the future. No reaction as of yet from Clinton, but the dancers chimed in to say they "hope she saw this, and felt the love."

The video is available here.

A Path Forward for U.S.-China Relations

A new report from CPD Advisory Board member Jerrold Green unpacks the importance of advancing U.S.-China relations through public diplomacy. Green delivered his remarks at the 2016 China-U.S. Public Diplomacy Summit held at...