Home|A Night in the NATO Agora 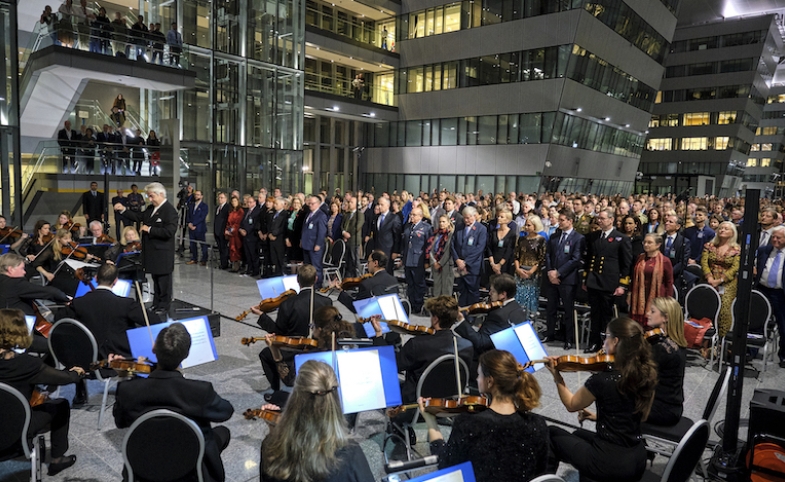 The sight of NATO countries ministers meeting in the glass-encased Agora of the NATO Headquarters in Brussels, Belgium is not a rare one. Nor is the presence of military uniformed personnel for important meetings, events and commemorations.

What is indeed rare to see at the heart of the political-military Alliance is a 65-member symphonic orchestra one November Wednesday evening.

The concert was the brainchild of Bogdan Lazaroae, the Director of the Headquarters Project Office and Transition Office, who said:

“Art, in all its forms, is a universal language that transcends cultures, spoken languages, disagreements and difference. Art is something we can all coalesce around and have a common experience that will help us all set aside our differences and live what is in front of us. This concert brought us all together in a magnificent space and reminded us of our purpose in this building and the staying power of the Alliance over the last 70 years.”

The central piece of NATO’s new headquarters, Agora, came to life this November with a live performance by the Oxford Philharmonic Orchestra to commemorate NATO’s 70th anniversary as the celebratory year of the Alliance came to its closing at the Leaders meeting in London on December 4th.

The concert was opened with the NATO Anthem followed by Bruch’s Violin Concerto No. 1 and Beethoven’s Symphony No. 5. After a standing ovation the concert was closed by a rather playful rendition of “Happy Birthday” in honor of NATO’s 70th anniversary. 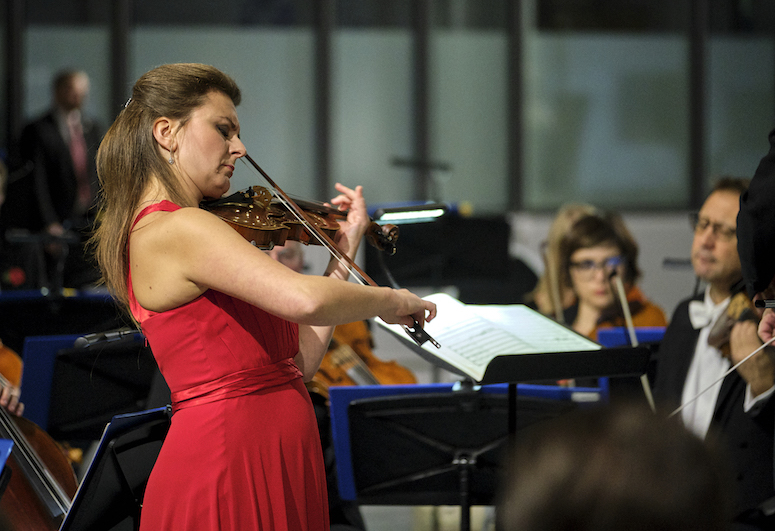 NATO opening its doors to the arts is not new—art was present in many forms in the different NATO headquarters over the years. Most notably, there are a number of artistic pieces that have been donated over the years including a large outdoor mural and the now-ubiquitous NATO star sculpture.

The North Atlantic Alliance changed its home five times since its creation—from its original location in London to Paris, twice, and then in 1967 to Brussels, Belgium. Since then, it was located in a functional but not very appealing military-like barracks that were erected in the sixties as a temporarily home after a forced move out of France following decisions by then-French President Charles de Gaulle.

NATO completed the change of its headquarters in a long-anticipated move in June 2018. The new headquarters was a long-time coming project costing 1.17 billion Euro, housing over 4,000 people including NATO civilian international staff, international military staff and national delegations of all member states as well as a number of NATO agencies.

The architectural design was developed by Skidmore, Owings & Merrill and it symbolizes the fingers of two hands interlocked in a gesture of protection.

And while it is indeed a modern building with environmentally sustainable features offering modern office space, the NATO leadership also foresaw the building as part of NATO’s modern image as a leaner, transparent and modern Alliance meeting the new security challenges of 21st century.

Embracing cultural diplomacy and art by NATO is an important element of its public diplomacy efforts.

The space called Agora, a central corridor that could accommodate Rome’s Piazza Navona, serves as a not just a passageway but, more importantly, a space that enables spontaneous interactions among those that work in the building, an essential ingredient in the decision-making process of the Alliance. At the same time it is a stunning visual space that can and has welcomed art and artists that contribute to NATO’s openness to the world.

The team working on the new headquarters developed a formal art program with the objective of bringing art into the NATO Headquarters but more importantly increasing the presence of the NATO to the world. Since the move to its new home, NATO hosted an interactive art exhibit designed by a Portuguese artist, the UK Royal Marines marching band, an American gospel choir and a live architectural painting by a Spanish artist. There is also a permanent exhibit in the Arts Heritage Hub where the art from the previous headquarters is displayed.

Two monuments commemorating NATO’s critical role in peace and security are on display at the Public Entrance of the building. One is composed of two segments of the Berlin Wall, to commemorate the Cold War and NATO’s role in it. The other is a steel beam from the 107th floor of the World Trade Centre 1 building in New York City. It is a memorial to the 9/11 attacks and the first-ever invocation of the Article 5 of the North Atlantic Treaty.

Embracing cultural diplomacy and art by NATO is an important element of its public diplomacy efforts. 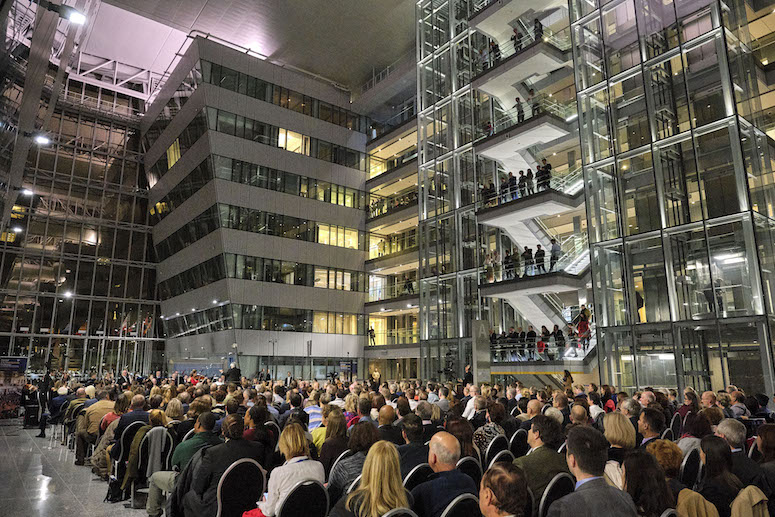 On a smaller scale, the NATO Information and Documentation Centre in Kyiv, Ukraine has also launched its own artistic program. In its Creative Space, the team invites Ukrainian artists to display their works, thus providing avenues for closer cooperation and fostering understanding between the Ukrainian artistic community and NATO. For the past two years since its creation, the NATO Creative Space in Kyiv has hosted ten exhibits.

Cultural exchanges have been one of the key pillars and essences of public diplomacy among our humankind. In the modern era of social media, let us not forget about the importance and impact of cultural exchanges on foreign audiences.

Fostering understanding of NATO’s role in today’s world can be achieved in many ways and forms—one of which is art. And with its new modern building, NATO found another creative way of doing just that—bringing art closer to the people.

Note from the CPD Blog Manager: Read Maronkova’s piece on NATO’s 70th anniversary, “NATO at 70: A Journey of Our History and Public Diplomacy,” here.