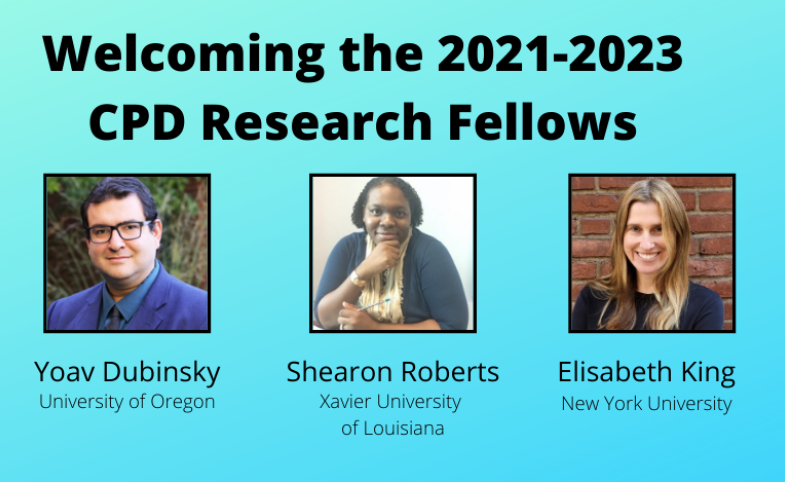 The Center is pleased to announce the addition of three new CPD Research Fellows: Yoav Dubinsky from the University of Oregon, Elisabeth King from New York University, and Shearon Roberts from Xavier University of Louisiana.

CPD Research Fellows are selected from a competitive pool of international applicants from around the world and each oversee a substantive research project that yields at least two outputs, including one paper published by CPD Perspectives on Public Diplomacy. The second output may consist of a series for the CPD Blog or another type of publication the Fellow develops with CPD.

Yoav Dubinsky is an Instructor of Sports Business in the Lundquist College of Business at the University of Oregon, where he teaches courses on sports, business and society and on marketing. Dubinsky is a sports researcher and a former sports journalist with over 15 years of experience covering and researching sports around the world. His interdisciplinary scholarship focuses on sports, place branding, public diplomacy and country image. Born and raised in Tel-Aviv, Israel, Dubinsky has published over a dozen peer-reviewed academic publications including in journals such as Place Branding & Public Diplomacy. As a journalist, Dubinsky covered hundreds of national and international sports events, including three Olympic Games from Beijing, London and Rio de Janeiro. Research project: Sport-Tech Diplomacy in the Tokyo Olympic Games

Elisabeth King is Associate Professor of International Education and Politics at New York University and founding director of NYU’s minor in Peace and Conflict Studies. Her research focuses on war, peace, development and education in ethnically diverse and conflict-affected contexts. She is author (with Cyrus Samii) of Diversity, Violence and Recognition: How Recognizing Ethnic Identity Promotes Peace (Oxford University Press, 2020) and From Classrooms to Conflict in Rwanda (Cambridge University Press, 2014), named an Outstanding Academic Title by the American Libraries Association. Research project: Symbolic Politics for Peace

Shearon Roberts is Associate Professor of Mass Communication and faculty member in African American and Diaspora Studies at Xavier University in New Orleans. She is the director of Xavier’s Exponential Honors Program. She earned a Ph.D. in Latin American Studies from Tulane University’s Roger Thayer Stone Center for Latin American Studies. Roberts researches comparative media systems; mainstream media representations of race, gender and the developing world; Latin America and Caribbean media; and international development. She has published on the role of the media in post-disaster recovery. Her forthcoming book Media Discourse in Haiti examines the last decade in Haiti through the lens of Haiti’s media as the country recovered from the 2010 earthquake. Research project: City Diplomacy in Advancing Black Racial Solidarity: Opportunities and Implications in the Wake of Social Justice Movements

Since 2009, the USC Center on Public Diplomacy Research Fellowship has supported and publicized the work of scholars and practitioners of public diplomacy. Each year, the Center selects three non-resident fellows, each serving a two-year term. All CPD Research Fellows can be viewed as part of our network here.

The latest issue of CPD Perspectives on Public Diplomacy demonstrates the use and value of an integrated country image measurement instrument by CPD Research Fellow Diana Ingenhoff and Jérôme Chariatte. In...

CPD is pleased to welcome Emily Metzgar, Director of the School of Media and Journalism at Kent State University and former CPD Research Fellow as Guest Editor for CPD Perspectives in Public Diplomacy, our...