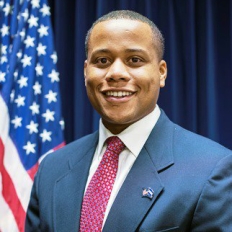 Cameron Thomas-Shah is a Foreign Service Officer at the U.S. Department of State. He served as Vice Consul in Ho Chi Minh City, Vietnam, Cultural Affair Officer in Tegucigalpa, Honduras, and Deputy Cultural Affairs Officer in Karachi, Pakistan. In 2022, he will serve as Spokesperson at the U.S. Embassy in Hanoi.

As a career-diplomat, he has led civil society development programs, women's economic empowerment initiatives, and broadly promoted U.S. higher education by inviting both the Morehouse College Glee Club and the Howard Gospel Choir to Latin America. Cameron has also managed large scale cultural diplomacy programs in the areas of film, entrepreneurship and social inclusion. He also developed the framework for one of the largest victim-centered anti-human trafficking projects in South Asia. He is the recipient of numerous awards including the World of Difference Award from the International Alliance of Women for tackling gender-based violence and supporting women's economic empowerment in Honduras.

Cameron has a bachelor of arts in International Studies from Morehouse College and a master of arts from Johns Hopkins SAIS in American Foreign Policy. Cameron has traveled to more than 50 countries and speaks Spanish and Vietnamese.

Cameron Thomas-Shah is a term member of the Council on Foreign Relations.