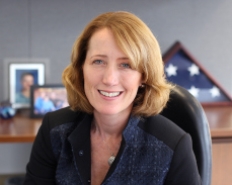 Kristin Lord joined IREX as the organization’s fifth President and CEO in October 2014, bringing more than twenty years of experience in the fields of foreign policy, higher education, technology, and human development.

Dr. Lord is also the co-chair for the Alliance for International Youth Development and a member of the Board of Directors for the US Global Leadership Coalition.

Previously, Dr. Lord served as Acting President and Executive Vice President of the United States Institute of Peace, a Congressionally-created organization that prevents, mitigates and resolves violent conflict worldwide. From 2009–2013, she was Executive Vice President and Director of Studies at the Center for a New American Security, where she oversaw the Center’s research and served as one of three members of the Center’s leadership team. During her tenure there, she also authored reports on U.S. grand strategy, cyber security, diplomacy and development.  Prior to joining CNAS, Lord was a fellow at The Brookings Institution and directed the science and technology initiative of the Project on U.S. Relations with the Islamic World.

From 1995-2008, she held leadership roles at The George Washington University's Elliott School of International Affairs including Associate Dean for Strategy, Research, and External Relations. During her tenure at the Elliott School, she launched three master's programs, ten certificate programs, a global network of university partnerships, the school's skills curriculum, and numerous educational programs for students, diplomats, and mid-career professionals from the public, private, and non-profit sectors. A member of the faculty, she taught courses on U.S. public diplomacy, U.S. foreign policy, and the causes of war. Dr. Lord received an International Affairs Fellowship from the Council on Foreign Relations, where she is now a life member, enabling her to serve as special advisor to the Under Secretary of State for Democracy and Global Affairs from 2005-2006. In that role, she worked on a wide range of issues including international science and technology cooperation, international health, and public diplomacy.