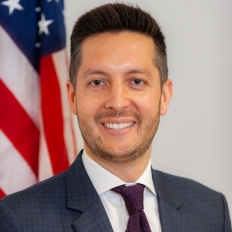 Matthew Asada is a fourth generation Japanese-American and third generation public servant from Detroit. He joined the U.S. Foreign Service in 2003. He most recently served as the Deputy Commissioner General of the USA Pavilion at Expo 2020 Dubai – the first World’s Fair to be held in the Middle East. From 2018-2020 he served as the pavilion’s project manager in Washington, DC.

As a Foreign Service officer he has served in border posts in Afghanistan, India, Pakistan, and Germany. On the German-led Provincial Reconstruction Team in Kunduz he helped expand the opening hours and maximize trade opportunities of the new U.S.-funded $49 million Afghan-Tajik Bridge. Two years later, he staffed Ambassadors Marc Grossman and the late Richard Holbrooke as they sought to forge a political settlement to the conflict in Afghanistan. In New Delhi, he was responsible for U.S.-India exchanges, alumni outreach, and higher education cooperation. As an American Political Science Association (APSA) Congressional Fellow with his hometown Congressman Gary Peters, he worked to increase trade and travel through the Detroit-Windsor corridor, one of the world’s most important trade links.

He graduated from the London School of Economics (MSc in European Politics and Policy) and the University of Pennsylvania (BS in Economics, BA in International Studies and German). He also studied at the Johns Hopkins School of Advanced International Studies and the Humboldt University in Berlin. He speaks fluent German and rudimentary Hindi, Urdu, Dari, and Spanish. He is an alumnus of the Atlantik-Brücke, APAICS, Japanese American Citizen’s League Young Leader programs and an International Career Advancement Program fellow.