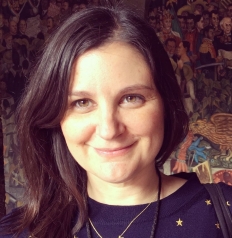 Rachel Gandin Mark is Director of International Programs at the USC School of Cinematic Arts, where she oversees two U.S. State Department grant programs. She is the Program Director of the American Film Showcase (AFS), the largest arts exchange program of the American government, and the Co-Principal Investigator of the Middle East Media Initiative, an innovative diplomacy program training TV writers and producers from across the Arab World. Previously, Rachel was the sole producer of Disney’s first Arabic-language feature, The United, released internationally in 2013, served for many years as Creative Consultant for the Sundance Institute’s Screenwriters Lab in Jordan, and founded the Arab Film Festival in Los Angeles. Rachel regularly speaks on film and TV diplomacy, including at the Paley Center for Media, the Writers Guild of America (WGA), the International Documentary Association, and Comic-Con. She received an M.A. in Arabic from Georgetown’s School of Foreign Service, a B.A. in International Development from UCLA, and lived in Cairo, Egypt for many years. Rachel is a 2020 Truman National Security Fellow.