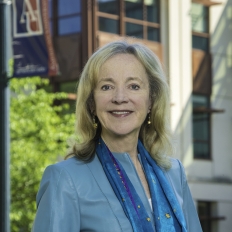 Sherry Lee Mueller, Ph.D., Distinguished Practitioner in Residence, School of International Service (SIS), American University, Washington, D.C., teaches a graduate Practicum entitled Cultural Diplomacy and International Exchange. As part of her ongoing consulting practice, in 2015 Professor Mueller served as the Higher Education Specialist for IBTCI on a bi-national team conducting a mid-term evaluation of a USAID-sponsored scholarship program for Indonesians. This included six weeks of fieldwork in Indonesia. After serving as President of Global Ties U.S. (formerly NCIV) from 1996 to 2011, the Board of Directors named Sherry President Emeritus. Sherry also worked for the Institute of International Education (IIE) for eighteen years, first as a program officer and then as Director, Professional Exchange Programs. Prior to joining IIE, she served as an Experiment in International Living Leader to the former Soviet Union, a Liaison Officer for the U.S. Department of State, and a lecturer at the University of Rhode Island.

Ms. Mueller is an active volunteer and has served on the boards of various nonprofit organizations including World Learning, Friendship Force International, Business for Diplomatic Action, and the U.S. Center for Citizen Diplomacy. Currently she serves on the boards of Public Diplomacy Council, PYXERA Global and the International Student House in Washington D.C. In May 2019 she was elected president of the Public Diplomacy Council. She is also a member of the SIS Dean’s Council.

In May 2019 the Institute of International Education awarded Sherry an IIE Centennial Medal for her lifelong dedication to international education and cultural exchange. In 2017 the SIS Dean presented Sherry with an Excellence in Teaching Award as an Adjunct Professor.  In 2011, ‘One To World’ presented Sherry with the Fulbright Award for Citizen Diplomacy for “lifelong contributions to global understanding and cooperation, one handshake at a time, in the Fulbright tradition.” In 2007, Sherry accepted the SIS Alumna of the Year Award at the German Embassy. She received the U.S. Information Agency's Award for Outstanding Service in 1996, and the Distinguished Alumna Award from the Lake Park High School Educational Foundation in 1995. In appreciation for her active role in alumni affairs at American University, Sherry received the Alumni Recognition Award in 1990.

Sherry has lived in Brazil, where she taught English; participated in an Experiment in International Living program in Germany; and has traveled extensively throughout Europe and Southeast Asia. She has served as a U.S. Department of State speaker in Saudi Arabia and Japan, giving lectures and conducting workshops on leadership development for nonprofit organizations. Selected publications include “The Impact and Practice of Citizen Diplomacy” in Public Diplomacy Magazine, published by University of Southern California (2012), and “Professional Exchanges, Citizen Diplomacy, and Credibility” in America’s Dialogue with the World, published by the Public Diplomacy Council (2008). In 2008, Georgetown University Press published the book Working World: Careers in International Education, Exchange, and Development that Ms. Mueller coauthored with Mark Overmann. The second edition of Working World was published in 2014.

Ms. Mueller earned her M.A.L.D. and Ph.D. from the Fletcher School of Law and Diplomacy. She is a native of northern Illinois.