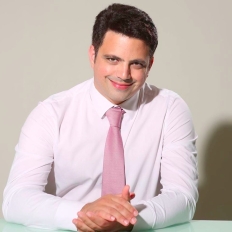 Shay Attias is a worldwide expert for innovative diplomacy who coined the concept of "Peer to Peer Diplomacy Network," first introduced at the 2011 ISA Annual Convention and later was published in The Hague Journal for Diplomacy (Brill, 2012). His pioneering study of "Global Citizens & Digital Diplomacy" describes the latest development in diplomatic practice, wherein civilians, by virtue of social media, are not only consumers of government information, but also information producers, with the potential to bypass existing official government bodies.

Shay's Ph.D. dissertation focused on the "Evaluation of Diplomacy from Modern time to the P2P Age" with the implementation of America's foreign policy (Bar-Ilan University). He is an Alumni of multiple prestigious academic training programs such as The Public Diplomacy Collaborative Initiative at Harvard and the USC Summer Institute in Public Diplomacy. Shay brings into his research a vast experience in public diplomacy. He is a Former Senior Public Diplomat who founded the (first) Public Diplomacy Bureau in the Prime Minister's Office of Israel, which he headed, as well as other leading PD roles he fulfilled. He is a frequent speaker in various foreign affairs and parliamentary commissions.

Today, Shay is a lecturer at Bar-Ilan University in the School of Communication and International School, where he teaches Public Diplomacy and Global Diplomatic Crisis Management (B.A. & M.A. programs). He also runs the research project of "Soft power & Global Standing" in the BESA Center for Strategic Affairs. As a researcher, his articles touch the fast-changing nature of diplomacy, soft-power evolution, and the rising power of global citizenship in diplomacy. Shay's work, "measurement of global image, national branding, and diplomacy" (2009) was presented in various senior forums (ISA, 2010) The Center for Cultural Diplomacy in Berlin, in the Harvard Kennedy School and was implemented in various foreign ministries.

As a firm believer in People's diplomacy to overcome shared global challenges, Shay is the President of "The Global Coalition for Citizen Diplomacy," a nonprofit that promotes the "global-citizenship peace initiative," operating in many countries around the world. For his public diplomacy life's work, Shay won the prestigious proclamation for his diplomatic achievements by the New York City Council (2012). Later, he won the annual recognition from Pennsylvania's House of Representatives for "bridging between people around the globe" (2018).