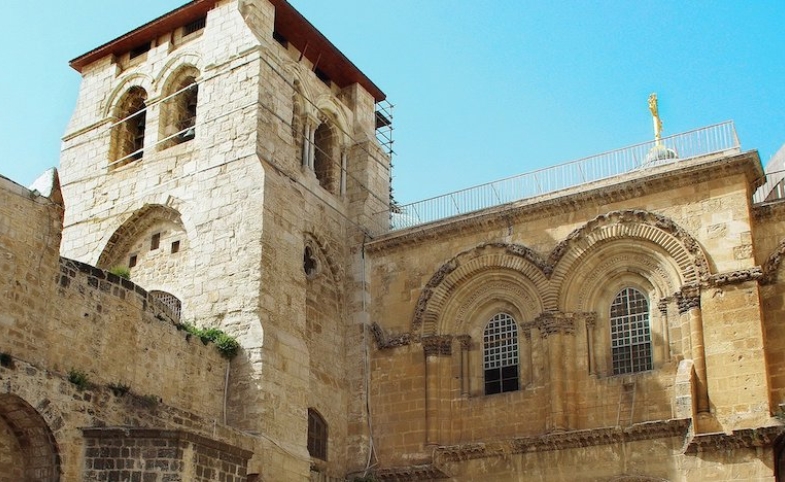 Note from the CPD Blog Manager: This article was originally published here by the Begin-Sadat Center for Strategic Studies at Bar-Ilan University.

Executive Summary: The recent “backpacker deal,” the Crimean Peninsula annexation, and Russia’s Sochi Olympic Games are all examples of Vladimir Putin’s global “smart power” strategy, which combines soft and hard power. In winning Russian sovereignty over the Jerusalem complex near the Church of the Holy Sepulchre, he scored a significant soft power win.

In January 2020, Benjamin Netanyahu and Vladimir Putin struck a deal that rescued Israeli backpacker Naama Issachar from a Russian prison and brought her safely home in exchange for Russian sovereignty over the Alexander Courtyard in Jerusalem, which is near the Church of the Holy Sepulchre. This deal was a major win for Vladimir Putin as he pursues his aim of Russian global imperialism.

Since 2000, Putin has worked hard to return Russia to the status of global superpower, and the Russian Orthodox Church has been a cardinal component of this plan. Putin’s object is not only to preserve Russian culture but to turn it into a dominant force in the Middle East. To accomplish this, he is employing a grand strategy that is strongly reminiscent of Suzanne Nossel and Joseph Nye’s idea of “smart power.”

Since 2000, Putin has worked hard to return Russia to the status of global superpower, and the Russian Orthodox Church has been a cardinal component of this plan. Putin’s object is not only to preserve Russian culture but to turn it into a dominant force in the Middle East. To accomplish this, he is employing a grand strategy that is strongly reminiscent of Suzanne Nossel and Joseph Nye’s idea of “smart power.”

On the one hand, Russia, under Putin’s leadership, has showed impressive diplomatic and cultural openness. The Sochi Olympics of 2014, for example, showed off a Russia that had been “rebrand[ed]…as a strong, stable, modern and gracious” country. The 2018 World Cup similarly strengthened Russia’s global image.

In January 2020, Putin scored another soft power goal, and this one was religious. After decades of argument, he finally claimed Russian ownership of the Alexander Courtyard in Jerusalem, near the Church of the Holy Sepulchre—his quid pro quo for the release of Israeli backpacker Naama Issachar from a Russian prison.

The dispute over the Alexander Courtyard began in 1917. In May 1948, the Soviet Union appointed a “Russian Property Affairs Commissioner” who “did everything possible to transfer this property [the Alexander Courtyard] to the Soviet Union.” This was desired not only because the Russian Orthodox Church wanted the property, but because it had value in terms of foreign policy and national security.

Putin has dramatically upgraded the status of the Russian Orthodox Church during his tenure as national leader. In almost every major speech, he has made sure not only to mention the Church but to support its faith narratives. Powerful pro-Putin oligarchs have sponsored the Church and funded Church charities he has touted. He has regularly used the language of the Church and quoted from the Russian Christian bible, sometimes even using it to justify his foreign policy steps. He has used such language to hold onto the hearts and minds of pro-Russian Ukrainians, for instance.

Some suggest that Putin’s behavior toward the Church is reminiscent of Stalin. For a long period following the Russian Revolution of 1917, the communist government attacked the Church, destroying churches and killing priests. This came to an end in 1943 when Stalin adopted a new policy toward the Church that funded the observation and celebration of Christmas and other Christian feasts.

Victories like these help Putin justify Russian military conquests and reach out to pro-Russian activists around “disputed areas” such as those in Moldova, Georgia, and, of course, Ukraine, all of which helps him maintain his battle against Western influence in Eastern Europe.

According to Pew Research, the number of Russian adults identifying as Orthodox Christians rose from 37% in 1991 to 72% in 2008.

Putin has accomplished tremendous soft power achievements that have positioned Russia as a de facto global superpower. Among them are recent diplomatic efforts with the Taliban; the establishment of the successful international media channel RT (RT Arabic); the creation of Rossotrudnichestvo, the first Russian diaspora agency; and the creation of the Russian Centers for Science and Culture (RCSC) in Jordan, Lebanon, Syria, Egypt, Morocco, Tunisia, and the Palestinian areas.

Putin carried out one of his core initiatives after the 2014 Sochi Olympic Games: the annexation of Crimea. He justified this action by invoking the terminology and narratives of the Russian Orthodox Church:

Everything in Crimea speaks of our shared history and pride. This is the location of the ancient Khersones, where Prince Vladimir was baptized. His spiritual feat of adopting Orthodoxy predetermined the overall basis of the culture, civilization, and human values that unite the peoples of Russia, Ukraine, and Belarus.

As Putin has demonstrated, “smart power” involves the use of both soft and hard power. In the past decade, Russia has been very aggressive. It occupied territory in Georgia (2008), moved on to Ukraine (2014) and Moldova, and is now in Syria.

Russia still enjoys a high degree of influence in the post-Soviet areas, and Putin understands that the Russian Orthodox Church is one of the country’s cultural assets. Russian churches in Ukraine, Belarus, Armenia, Georgia, Moldova, Lithuania, Latvia, and Estonia can all be used to boost that influence. As Putin just showed in Jerusalem, he is fully capable of using the Church to enhance Russian prestige.

Putin is using religion as a tool of soft power in conjunction with aggressive hard power strikes to rekindle the idea of a great Russia. It is not surprising that in the nine former Soviet countries (not including Ukraine), more than half of those surveyed by Pew said that “a strong Russia is necessary to balance the influence of the West.” Other polls support this finding. Putin is using traditional religious sentiment to build common ground between Russia and Eastern Europe.

The “backpacker deal” for Naama Issachar was an important milestone. The granting of sovereignty over any part of Jerusalem to a foreign power is a significant concession for Israel. Russian cultural and military imperialism are here to stay, and Putin is eager to expand them further. This time around, the target of Russia’s religious soft power was Jerusalem. It will be interesting to see where it strikes next.