Home|Design & PD at the Dutch Embassy in Brussels 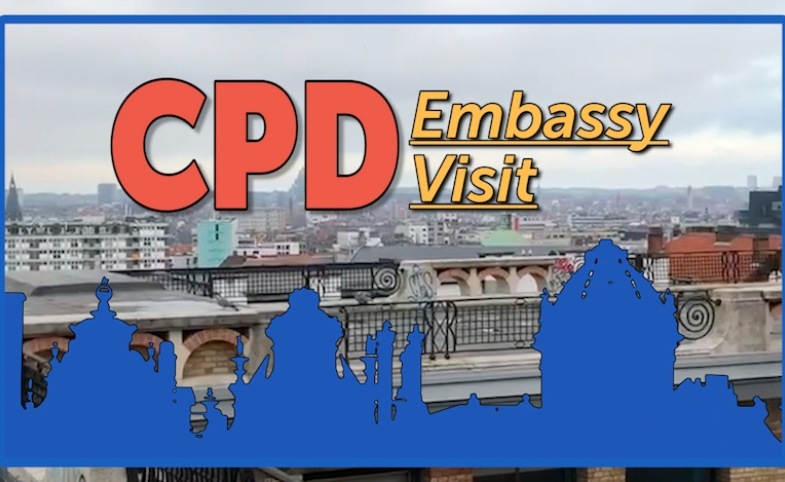 Design & PD at the Dutch Embassy in Brussels

Having lived in Washington, D.C. for eight years, I would pass by an embassy nearly every day. Walking down Embassy Row, you see how the British Embassy and ambassador’s residence look distinctly British, the Brazilian Embassy showcases stunning design by Brazilian architect Olavo Redig de Campos, and a statue of Mustafa Kemal Atatürk greets you at the entrance of the Turkish Embassy. Fast forward to this year, when CPD crossed the Atlantic to convene PD Week in Brussels: Technology, Storytelling, and Public Diplomacy, hosted at the Dutch Embassy in Brussels. Throughout the week, I learned how diplomats are approaching the rise of artificial intelligence (AI), and witnessed the ongoing conversation on the relationship between tech platforms and diplomacy. I even got to document the week-long experience while gaining new multimedia production skills (check out my Instagram Story on USC’s page).

Importantly, I also deepened my understanding of a topic I had not thought of much in the context of public diplomacy: design and architecture. When I think about spaces known for cultural exchange, such as the Louvre in Paris or the Hagia Sophia in Istanbul, I think about their unique historical and educational significance. Can our modern spaces carry the same storytelling potential?

As I had never been to the Netherlands nor Belgium, I was excited to see how the inside of the Dutch Embassy in Brussels differed from others I had admired in D.C. Luckily, our hosts were gracious enough to provide a behind-the-scenes look at their embassy.

Through Hanna Oosterbaan, Public Diplomacy Coordinator and Cultural Attaché, I learned about how the building and its decor tells the story of the Netherlands’ relationship with Belgium and Europe as a whole (i.e., the building shares the space with their Permanent Representation to the EU) and tells stories through their collections of Dutch art. What was especially interesting to see is how core components of public diplomacy guided the embassy’s recent renovations.

Once divided by a series of walls and doors, the upper floors of the Dutch Embassy have been opened up to create a shared, more open office space. As someone who had pictured embassies as having distinct hierarchies with the ambassador at the head, the space, to me, more resembled a hip Silicon Valley tech office than my idea of a traditional embassy. Everyone—including Ambassador Maryem van den Heuvel—picks their own desk each day rather than being assigned to offices that reflect their position in a diplomatic hierarchy. The renovations, Hanna says, allow colleagues who work across sectors, including culture, economics and more, to better understand each other’s work. Diplomacy is about “making the connections,” she told me, and it seems that the embassy is applying the key principles of openness, conversation and understanding to the very architecture of their building. See the embassy for yourself by joining our tour:

It is worth noting that the 21st century notion of the “open office space” has not risen to popularity without criticism. In many places around the world, security, some say, supersedes the openness needed for effective public diplomacy and is an important consideration that guides the look and feel of diplomatic posts. Finding workable solutions to balance the reality of an embassy’s myriad functions—office space, reception space, educational center, etc.—while reflecting the architecture and values of both the home and host countries is a conversation that will continue to evolve as diplomacy adapts to the times. For the Dutch Embassy in Brussels, transforming once closed-off spaces into a collaborative workspace creates a "different dynamic," Ambassador van den Heuvel told me (watch the tour for our full conversation), that offers staff both physical and mental flexibility.

Today, scholars, think tanks and design labs, such as the Hybrid Space Lab in Berlin, are even fusing urban design, architecture and art to harmonize physical spaces to the stories you want to tell (Check out our interview with co-founders Elizabeth Sikiaridi and Frans Vogelaar at Diplocamp below. Click here for additional interviews with experts on artificial intelligence, Facebook and digital diplomacy.). Our ongoing conversations about the monuments standing in our public spaces also reflect how the people and events we choose to  venerate are the subject of constant reflection, scrutiny and, at times, conflict.

In the U.S., the Department of State’s American Spaces program focuses on the importance of physical spaces to international exchange and education. In 2012, the Bureau of International Information Programs (IIP) partnered with the Smithsonian Institution to adapt American Centers, Information Resource Centers, American Corners and Bi-national Centers worldwide to today’s public diplomacy needs. The result includes re-designed libraries, “Entrepreneur Incubator” programming, and art capturing the ethos of influential Americans like Martin Luther King, Jr. and Maya Angelou. Important to this re-design initiative, the experts have said, is collaborating with design specialists and creating "a cohesive global look and feel" of these centers around the world.

Architecture and art tell stories and can be a reflection of societal values such as openness, equality and freedom of expression. The relevance of physical spaces to public diplomacy persists even as people around the world continue to foster connections across virtual spaces. This consideration also points to the number of voices significant to our understanding of public diplomacy—looking to architects, designers, artists, urban planners and more will help us as public diplomats to strengthen our practice and hone our storytelling abilities. My time at the beautiful Dutch Embassy in Brussels showed me how one diplomatic post was telling their story through the physical, and I hope to continue to expand my understanding of this topic during the remainder of my time with CPD and beyond.