Home|Intolerance in Hungary: Crafting an Other 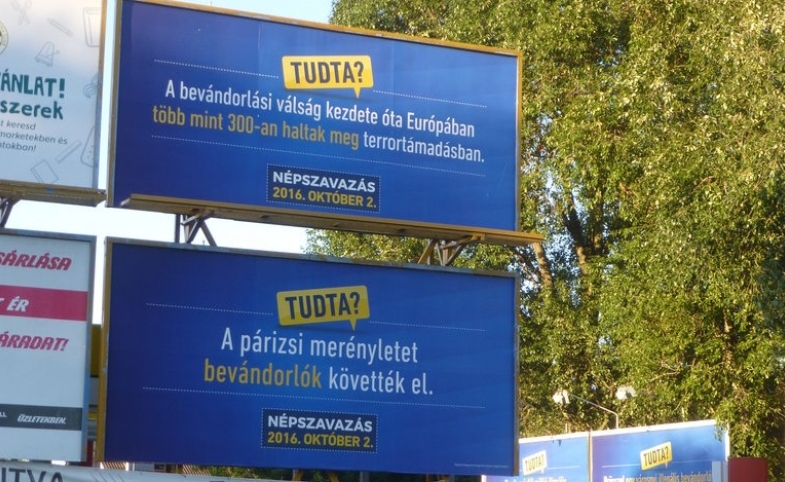 Intolerance in Hungary: Crafting an Other

This three-part series explores how the Hungarian government transformed its refugee and migrant populations into enemies of the state in order to consolidate its hold on power. Part 1 addressed the closure of Hungary’s media space and the government’s initial efforts to respond to the 2015 refugee crisis. Part 2 describes the deliberate construction of a national anti-migrant discourse to justify increasingly authoritarian measures. Part 3 will examine the resultant migrant-spotting phenomenon and the broader consequences for the future of Euro-Atlantic cooperation.

Closed borders, invasions, desperate refugees, violent clashes, “ghettos” for particular ethnic groups in the heart of the capital city—these unsettling conditions surely evoked Hungary’s historical experience of mass persecution and brutal occupation. To reassure a nervous public, the government engaged in a series of visual and rhetorical narratives to communicate its ability to maintain order. For example, the Hungarian language billboard campaign aimed at “illegal” migrants featured statements such as, “If you come to Hungary, you need to respect our laws” or, “If you come to Hungary, you cannot take away Hungarian jobs.” Since few, if any, refugees could speak Hungarian, these billboards were clearly aimed at Hungarian citizens, reinforcing the message that the government was prepared to take an aggressive stance in defense of its citizens.

The Hungarian government also made the deliberate narrative choice to emphasize the refugees’ cultural and religious “otherness,” the degree to which they were not like Hungarians or even Europeans. At this point the term “refugee” largely disappeared from official discourse, to be replaced by “migrant.” This allowed Prime Minister Viktor Orban to pursue the claim the refugees were not in fact fleeing conflict but instead had made a deliberate choice to migrate northward for economic or even criminal purposes. Repurposing the refugee crisis as a “mass migration” permitted him to portray Hungary as Christian Europe’s first line of defense against a Muslim influx:

Those arriving have been raised in another religion, and represent a radically different culture. Most of them are not Christians, but Muslims … Is it not worrying in itself that European Christianity is now barely able to keep Europe Christian? There is no alternative, and we have no option but to defend our borders.

In Orban’s narrative the presence of the migrants in Hungary represented nothing less than a clash of civilizations between Christianity and Islam that would require equally outsized (and undemocratic) measures to contain.

The second or “impact” phase of Cohen’s moral panic model builds on the consequences of the precipitating event to develop a sustained narrative in the service of a political agenda. With the November 2015 completion of the security fence along the Hungarian-Serbian border, along with Turkey’s E.U.-sanctioned role as gatekeeper, the number of migrants passing through Hungary decreased significantly. To keep public attention focused on the migrant threat—and to justify its increasingly authoritarian behavior—the Hungarian government required a new, more potent target.

It chose to look outside Hungary, beginning with the Hungarian-American billionaire and philanthropist George Soros.* First, the Hungarian government claimed that under the guise of democratization efforts, Soros planned to relocate one million illegal immigrants to Europe with the “intention of bringing down borders between member states, creating “social and economic chaos” and debasing “traditional Christian values.” Orban also engaged in a broad attack on what he described as the European Union’s threat to Hungary’s sovereignty: “We need a European Union that does not … in such stealthy fashion deprive member states of more and more spheres of authority, as has occurred over the past years.”

The third or “inventory” stage of moral panic, according to Cohen, elaborates the initial threat through a catalogue of its consequences. Having elevated the presence of migrants on Hungarian soil to the level of an existential threat, the Hungarian government exposed the public to a disturbing vision of what ethnic tolerance and religious inclusivity might mean to national security and prosperity. Then, it introduced a set of increasingly authoritarian measures to curb the migrant threat. In late 2015, for example, the government proposed an amendment to the 2007 law on national asylum to address “the crisis situation caused by mass migration.” A popular referendum on the E.U.’s refugee relocation proposal resulted in a June 2018 amendment to the constitution that limits the number of “non-Hungarians” who may settle in Hungary. The accompanying outreach campaign flooded Hungary’s traditional and social media with statements about the migrant threat such as: “Did you know that Brussels wants to forcibly resettle numbers of illegal migrants the size of a city into Hungary?”

In June 2017, the Hungarian National Assembly adopted the Law on the Transparency of Organisations Receiving Foreign Funds. Modeled on Russia’s punitive Foreign Agent legislation, this law subjects all internationally funded NGOs to enhanced government scrutiny regardless of their scope of activity. Finally, in June 2018, the Hungarian government passed the “Stop Soros” bill, which specifically targeted NGOs assisting refugees in Hungary. A slick advertising campaign accompanied the bill, warning Hungarians once again that Soros planned to move “millions” from “Africa and the Middle East” to their country.

The non-stop series of political consultations and referenda on the immigrant question coincided with a set of government sponsored anti-immigrant media campaigns based on disinformation, misinformation and conspiracy theories. In the process of generating moral panic, the Hungarian government perfected a circular form of argumentation in which exaggerated half truths and outright lies were used to justify punitive responses to the anti-immigrant threat. State and pro-Fidesz private media served as the principle platforms for the projection of this falsified narrative. And finally, legislation codified it.

*Disclosure: One of the authors served as adjunct faculty at the Central European University originally founded by Soros and the other works for Political Capital, which has received grants from the Open Society Foundation, also founded by Soros.

Note from the CPD Blog Manager: This is Part 2 of a three-part series. This piece originally appeared in full on the War on the Rock's website.

This three-part series explores how the Hungarian government transformed its refugee and migrant populations into enemies of the state in order to consolidate its hold on power. Part 1 addresses the closure of Hungary’s...

This three-part series explores how the Hungarian government transformed its refugee and migrant populations into enemies of the state in order to consolidate its hold on power. Part 1 addressed the closure of...

In the good old days, we worried about carrying out effective public diplomacy in patently authoritarian, newly independent or conflict-ridden states. We had a well-established set of public diplomacy practices to lay the...

First ladies since Eleanor Roosevelt have developed over the years to do more than serve merely as White House hostess-in-chief. Barbara Bush took on an issue, applied her passion, and tried to move the needle on literacy....