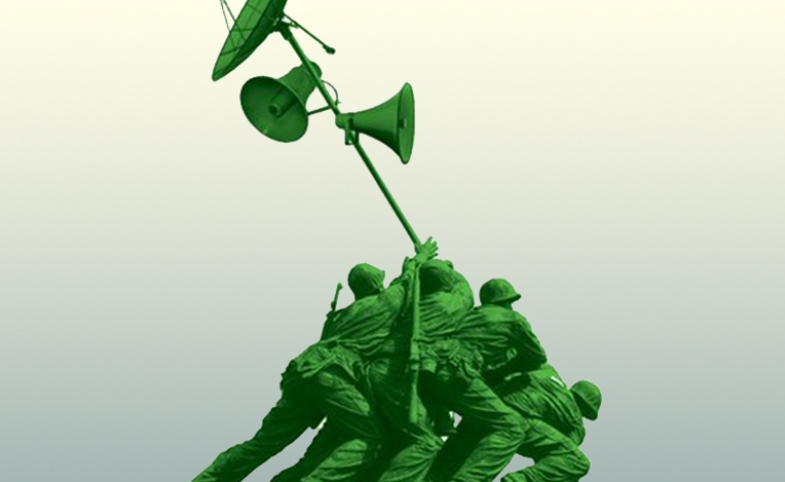 The “Wine-Dark Sea” of the Information Age

Note from the CPD Blog Manager: This is a book review of Information at War: Journalism, Disinformation, and Modern Warfare (2021, Polity) by CPD Faculty Fellow Philip Seib and was originally published in the July–August 2022 edition of the Foreign Service Journal here. Review author CPD Faculty Fellow Vivian S. Walker is a member of the Journal's Editorial Board.

Philip Seib’s Information at War: Journalism, Disinformation, and Modern Warfare offers an elegant and meticulously researched overview of the contemporary relationship between war and information, and the struggle for narrative control of the conflict “story.”

In tracing the “long and twisting path from Homer to Murrow to Putin to Xi Jinping,” Seib effectively makes the case that wars are no longer under the exclusive control of “bards and presidents and generals.” Rather, they are won—and lost—as decisively in the public information space as they are on the battlefield.

In Information at War, Seib brilliantly depicts the growing competition for public influence between the government and media, from the Cold War to the present day. He is especially effective in describing how improvements in information technologies, e.g., radio and then television, brought war “home” to the American public, motivating citizens to take an interest in its outcome.

In the chapter on “Living Room Wars,” for example, Seib ably demonstrates how the immediacy and emotional intensity of Edward R. Murrow’s 1940 radio broadcasts during the London blitzkrieg “stirred the conscience” of the American people and helped make the political case against isolationism.

Seib also persuasively tracks the emergence of the now familiar “mutual distrust” between the media and the government that came to dominate reporting on the Vietnam War, arguing that this mistrust actually originated with the John F. Kennedy administration’s heavy-handed attempts to suppress press reports about its ill-fated engagements with Cuba.

By the time Lyndon Johnson came to power, television reporting—with its capacity to provide graphic depictions of military setbacks—challenged the government’s ability to control the narrative. As Seib illustrates, the 1967 Tet Offensive became a “tipping point at which information from the news became ascendant, outweighing the government’s messaging and reshaping perceptions of the war.”

Ultimately, this meditation on the tension between “information democracy” and “information anarchy” is more elegy than handbook.

In subsequent chapters, Seib assesses the impact of media embeds on objective reporting during the first Gulf war, highlighting the challenge of accessing information without “excessive government interference.” In his view, instead of questioning the government’s rationale for the conflict with Iraq, the American journalistic establishment “accepted it as gospel.” At the same time, while the acceleration and diversification of social media platforms mitigated against an information monopoly, it also empowered individual citizens/soldiers whose narrative intent may have been no less subjective.

Turning from the media’s role in shaping the wartime narrative, Seib next evaluates the mechanics of contemporary information warfare, beginning with a competent overview of terrorist information tactics as conducted by al-Qaida, ISIS and other extremist organizations. He then takes on Russia’s weaponization of information and its corrosive effects and concludes with the unexpectedly fatalistic prediction that China is well on its way to exerting a “determinative” influence in the global media space.

In the closing chapters, Seib effectively explores the holistic yoking of journalism and disinformation, and the degree to which the public is both combatant and victim in the competition for influence. Like most experts confronted with the challenge of combating disinformation effects, however, Seib falls back on “preventive measures” such as media literacy training as an antidote to influence manipulation. But this is a half measure at best, one that requires enormous, sustained investments in education that are well beyond the purview of government-sponsored counterdisinformation programs.

Indeed, Information at War, to quote a modernist bard, ends “not with a bang but a whimper,” offering little in the way of solutions, but much in the way of dismay about the moral and ethical failures of conflict reporting. Seib correctly identifies the growing presence of value judgments embedded in ostensibly objective journalism. At the same time, he holds the public accountable for its failure to take responsibility for its information consumption by seeking out multiple (responsible) sources and viewpoints.

Seib is also more than a little dismayed by the digitally driven democratization of the global media space, in which free and unmediated access to information both empowers and imperils. To wage war successfully, a government must have the capacity to influence, if not control, the media ecosystem. But, as Seib notes, the competition for information domination does not necessarily benefit the public. The government seeks popular support for its policies, while the media seek to increase audience shares. The global public has, in the internet age, become directly involved in shaping these narratives of conflict to its own ends.

For a study focused largely on the current information environment, Seib’s decision to frame his text with the opening lines of Homer’s Iliad is telling. Ultimately, this meditation on the tension between “information democracy” and “information anarchy” is more elegy than handbook. Seib’s fundamentally pessimistic take on what he sees as a fractured, polarized and essentially uncontrollable media environment leaves the reader adrift on the “wine dark sea” of the information age.

A war’s outcome is determined by more than bullets and bombs. In our digital age, the proliferation of new media venues has magnified the importance of information—whether its content is true or purposely false—in battling...

Dispatch from Ukraine: On the Frontline of the Info War

Note from the CPD Blog Manager: This piece was originally published by the Pacific Council on International Policy. Philip Seib is author of As Terrorism Evolves, published by Cambridge University Press....