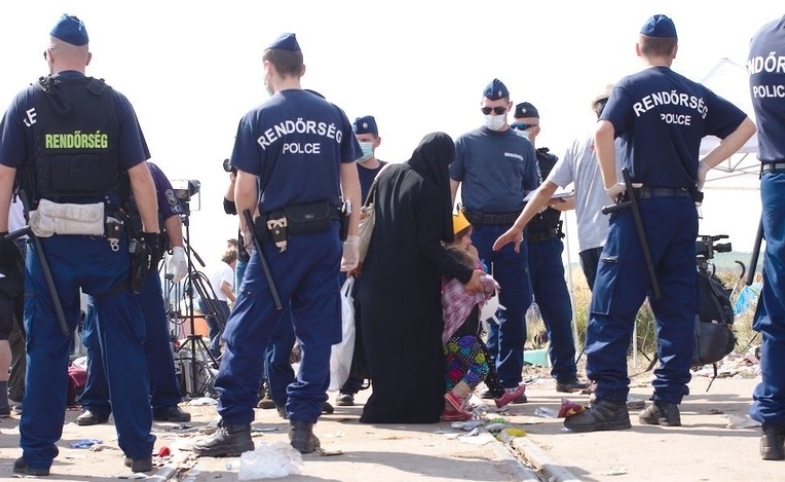 This three-part series explores how the Hungarian government transformed its refugee and migrant populations into enemies of the state in order to consolidate its hold on power. Part 1 addressed the closure of Hungary’s media space and the government’s initial efforts to respond to the 2015 refugee crisis. Part 2 described the deliberate construction of a national anti-migrant discourse to justify increasingly authoritarian measures. Part 3 examines the resultant migrant-spotting phenomenon and the broader consequences for the future of Euro-Atlantic cooperation.

The institutionalization of efforts to discourage the presence of migrants in Hungary set the stage for the final phase of moral panic campaign, in which, Stanley Cohen tells us, deliberate responses to the precipitating events or issues emerge. The process involves the “assignment of blame” and the implementation of established “norms and procedures” designed to curb or punish so-called “deviant” behaviors using available “controls,” e.g., law enforcement.

Enter migrant spotting, a grass-roots phenomenon that empowers citizens to report to local police on people who, in their view, don’t belong to their community and therefore represent a threat to public safety, whether they are strangers, have dark skin or exhibit behaviors that deviate from the norm.

Police in Southern Hungary, for example, detained a group of Hungarian pilgrims and their pastor after a local resident identified them as “Muslim illegal immigrants.” A uniformed Hungarian bus driver in Budapest forced an Austrian man of Nigerian background off a local bus. Visitors to a Hungarian nursing home called the police to report three “suspicious” men from Sri-Lanka who, it turned out, were doing United Nations-related volunteer work with the residents. And in Csongrád, law enforcement authorities responded to a report from a resident complaining that a young Hungarian woman was seen wearing a headscarf; a full police investigation of her activities revealed she had covered her wet hair after a trip to the beauty salon.

The Hungarian government’s direct, deliberate involvement in stoking xenophobia on a national scale is not only unprecedented among European and NATO member states in the 21st century but also showcases the fragility of democratic institutions in a complex media environment that is ripe for politically motivated exploitation.

Since 2015, independent online media outlets have reported a total of 21 instances of migrant spotting involving more than 250 victims. The number of incidents has increased, from two in 2015 to eight in the first five months of 2018. At least half of those “spotted” were Hungarian citizens. Not one of the individuals denounced had actually broken the law or disturbed the peace. And yet, thanks to the influence of the government’s moral panic narrative, their “otherness” criminalized them in the eyes of their accusers. Orban’s clash of civilizations between East and West, between Christian and Muslim, now plays out in communities across the country. With it comes the disruption of basic democratic principles such as due process, rule of law, freedom of religion and freedom of expression.

The “migrant spotting” phenomenon represents the final iteration of the Orban government’s narrative about disruptive “foreigners,” a narrative that has escalated into a much broader and more consequential attack on outside influencers who threaten Hungary’s intrinsic values.

In a recent speech, Orban claims:

Their faces are not visible, but are hidden from view; they do not fight directly, but by stealth; they are not honorable but unprincipled: they are not national, but international: they do not believe in work but speculate with money: they have no homeland, but feel that the whole world is theirs.

Hungary’s enemies include members of the “international” community such as the United Nations, Brussels, George Soros, the Western liberal elite or a nameless, faceless “world government.” They also include members of the Hungarian opposition and independent NGOs. In Orban’s narrative, all of them are attempting to enforce liberal democratic principles such as migration quotas under the guise of multiculturalism. The liberal internationalists’ ultimate goal, according to Orban, is the preservation of their “global” domination at the expense of Hungary’s identity and power, and, more importantly, his one-man rule.

Targeting ethnic minorities in the pursuit of national interests is certainly not a new phenomenon. Similar panic-mongering narratives have already emerged within the Euro-Atlantic community. However, the Hungarian government’s direct, deliberate involvement in stoking xenophobia on a national scale is not only unprecedented among European and NATO member states in the 21st century but also showcases the fragility of democratic institutions in a complex media environment that is ripe for politically motivated exploitation. In just eight years, Hungary has gone from a fairly liberal democracy to a country in which a single government narrative has the power to transform ordinary citizens into instruments of sanctioned discrimination on the basis of race, color and creed.

Why should the United States care? Having sunk to the level of Kremlin-style disinformation and denunciation of so-called “Western” liberal values to stay in power, Hungary’s reliability as a multilateral ally is uncertain. When a member state unapologetically flouts core principles such as individual liberty, equality, democracy, human rights and the rule of law, what happens to NATO “consensus"? To EU solidarity? As illiberal narratives come to dominate political discourse in countries like Hungary, U.S. policymakers should hold the narrators to account or bear witness to the decline of transatlantic unity.

Note from the CPD Blog Manager: This is Part 3 of a three-part series. This piece originally appeared in full on the War on the Rock's website.