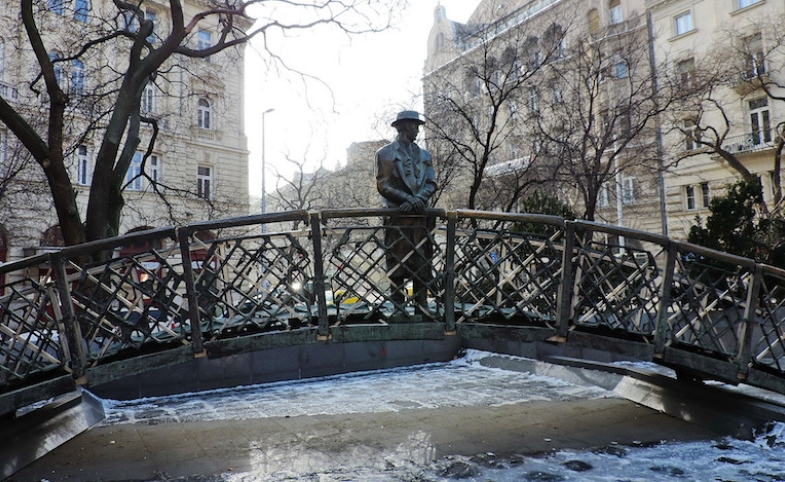 This is the first of a two-part article exploring the relationship between authoritarianism and disinformation in Prime Minister Viktor Orban's Hungary. Read part 2.

Hungary is reconstructing its political history, one monument at a time.

Before dawn on Dec. 28, 2018, authorities in Budapest removed the statue of Imre Nagy, Hungary’s prime minister during the 1956 anti-Soviet uprising, from its perch near parliament. Erected in 1996, with the support of current Prime Minister Viktor Orban’s political party, Fidesz, the figure on Martyr’s Square commemorated Hungary’s then-exuberant embrace of democratization after decades of Soviet rule.  While Nagy’s role in the ill-fated uprising remains controversial, his subsequent execution at the hands of Hungary’s pro-Moscow leadership made him a bona fide martyr of Soviet oppression and, in the words of Orban’s Fidesz allies, “a symbol of democratic transformation.”

Now, it seems, he is no longer. Nagy’s slight, bespectacled figure will be replaced by a “muscular man of the Hungarians” locked in combat with the dragon-like “monster of Bolshevism.” This memorial to those who perished during the Red Terror of 1919 is meant to honor the “true” victims of communism—those who suffered at the hands of the Bolsheviks. But this version of history ignores the role that Hungarian far-right ideologues played in the anti-communist purges. Worse yet, the “new” monument actually recreates a memorial erected in 1934, during the pro-Nazi regime of Adm. Miklos Horthy, which imposed stringent anti-Semitic regulations. But more about that later.

Granted, the practice of erecting memorials to a particular regime or ideology is hardly new. But Hungary’s brick-and-mortar revisionism is exceptional—and exceptionally troubling—for its apparent repudiation of democratic values and its implicit defense of authoritarian rule. Indeed, it resembles a classic disinformation campaign, including the outright denial of established historical truths and claims of victimhood at the hands of demonized aggressors. Orban’s mythmaking is not just a threat to Hungarians. As Hungary cozies up to Russia, bullies Ukraine, and earns E.U. censure for its retrograde policies on immigration, freedom of speech, and judicial reform, U.S. foreign policymakers had better pay attention. The decline of liberal democracy in the heart of Central Europe undermines the power of transatlantic institutions to protect U.S. interests.

Orban’s allies defended the removal of the Nagy statue as an effort to “take back our history and our historical spaces” and to correct the “liberal left wing” tendency to “glorify communism”:

What we see is a direct consequence of the left-wing’s spiritual [decline]. They can’t figure out anything new…What else could they do to get back to their successful past, when the “glorious” Soviet Republic…was the master of life and death?

The statue incident is also consistent with the Hungarian government’s harsh narrative against the purveyors of “ultra-liberal world views.” For those aware of Orban’s ad hominem attacks on George Soros and his “liberal internationalist empire”—not to mention the recent government-forced closure of the Soros-founded Central European University—this rhetoric is familiar. (As a disclaimer, I previously served as adjunct faculty at the university.)

Hungary’s brick-and-mortar revisionism is exceptional—and exceptionally troubling—for its apparent repudiation of democratic values and its implicit defense of authoritarian rule. Indeed, it resembles a classic disinformation campaign, including the outright denial of established historical truths and claims of victimhood at the hands of demonized aggressors.

Orban’s critics, meanwhile, described Nagy’s disappearance as “the re-establishment of the symbolic politics of the Horthy era” and a signal that Orban seeks to build on Horthy’s legacy of nationalist authoritarian rule. Others accuse the government of attempting to erase the “revolutionary” nature of Hungary’s past. They point out that the student-inspired revolt of 1956 called for a free press, freedom of opinion and expression, a transparent judicial process, and fair wages, all of which are at risk today in Orban’s self-styled “illiberal democracy.” Whatever you want to call it, the stealth removal of the statue represents an unambiguous attempt to influence public perceptions in the service of state interests.

Nagy’s unceremonious demotion isn’t the Hungarian government’s only recent attempt at historical revisionism. During the night of July 20-21, 2014, a memorial to “The Victims of the German Invasion”was erected on Freedom Square in the heart of Budapest’s tony fifth district. A fierce bronze eagle representing the Third Reich hovers threateningly over a statute of the Archangel Gabriel, who, orb in hand, symbolizes Hungary’s victimization. One of the eagle’s talons is banded with “1944,” the year of the invasion. While ostensibly a powerful anti-Nazi allegory, the monument’s visual narrative, which lays the blame for the Holocaust in Hungary solely on the German Nazis, disguises a terrible truth. In Hungary, harsh anti-Semitic laws, deportations, and mass murders, all sanctioned by the Horthy regime, began long before the German invasion in March 1944. Moreover, Hungarian authorities knowingly facilitated the deportation of an additional 437,000 Jews well after the Germans arrived.

Orban’s chief spokesman argued that the memorial was meant to “[put] back history, or historical perspectives, to where they should be,” adding:

One thing is for sure is that after March 19, 1944, the country lost its sovereignty. It was occupied. And there’s a historical fact that before that there was no Holocaust in this country, and then after the Germans came there was a Holocaust.

Setting aside the categorical denial of Hungarian complicity in the Holocaust, the focus on Hungary’s disenfranchisement and loss of sovereignty is striking. And yet, it is perfectly consistent with Orban’s oft-repeated conviction that every external power, including the European Union, is a potential threat to Hungary’s autonomy.

While Orban supporters praised the monument for its historical accuracy, a group of Hungarian historians issued an open letter stating, “the memorial falsifies an important period of our history, and [trivializes] the Holocaust in Hungary.” Others went further, accusing the Orban government of deliberately rewriting history in order to absolve the Horthy regime of its role in the deaths of two-thirds of Hungary’s Jewish population. And, in the shadow of the memorial, a pop-up exhibit featuring photos and mementos of Holocaust victims provides a stark counter-narrative. Nevertheless, the damage has been done. The Orban government has managed to transform Hungarian complicity in the Holocaust into a matter of debate rather than a matter of fact. This is disinformation at its finest.

In fact, the Fidesz effort to recast Hungary as a martyr to malign external forces goes back at least to 2002, when the House of Terror Museum was created.  Conceptualized by Orban loyalist Maria Schmidt, the House of Terror was originally intended, as scholar Péter Apor puts it, “to convince Hungarians that the political left was dangerously associated with the potential of a brutal dictatorship, and to regenerate national identity and pride as an antidote within society.” Billed on its website as a fitting memorial to the victims of two terror regimes, the museum occupies the former headquarters of the Hungarian Communist Secret Service and, before that, the Hungarian Nazi Arrow Cross party. Indeed, the entire museum essentially depicts Hungary as the helpless victim of these two “equally devilish ideologically motivated superpowers.” In equating Communism with Nazism, the exhibit’s narrative plays up the misdeeds of the left while obscuring those of the far right. This redirection of blame is central to Orban’s political narrative.

Note from the CPD Blog Manager: Part two of this series dives deep into the global political context of this brick-and-mortar disinformation campaign. This article was originally published in full by War on the Rocks.

Say It With Statues: Disinformation and Authoritarianism

This is the second of a two-part article exploring the relationship between authoritarianism and disinformation in Prime Minister Viktor Orban's Hungary. Read part 1. Effective disinformation campaigns...