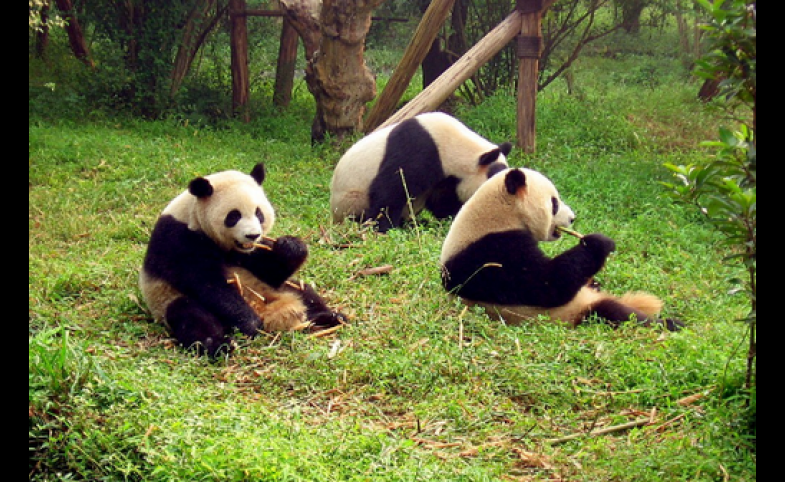 The Latest Round of China’s Panda Diplomacy: Winning Hearts in Belgium

On February 23, two giant pandas arrived in Belgium on a 15-year loan, where they received a red-carpet welcome. Among those waiting on the tarmac were 2000 people, many of them excited kids, and also the Belgian Prime Minister Elio Di Rupo. In September 2013, Di Rupo and Chinese Premier Li Keqiang signed the agreement to send the two mammals to the Pairi Daiza Animal Park, some 30 miles southwest of Brussels.

With only about 1600 giant pandas left in the wild, China is very concerned about renting them out, and the Belgian zoo is one of just 17 zoos around the world hosting these cuddly creatures. According to Chinese statistics, 43 giant pandas, including cubs, are currently living overseas.

Both Chinese and Belgian stakeholders emphasize scientific research on the importance of protecting the species do not discuss the public diplomacy dimension of the loan. Although global media is panda-crazy (about 100 journalists were waiting at the airport), the pandas have their own twitter feed and parts of Belgium are in the state of “Panda-Monium.” The caution around directly speaking about diplomacy is understandable because the Convention on International Trade in Endangered Species of Wild Fauna and Flora (CITES) — an international treaty and international organization — determines that the export of pandas will only be authorized if China and the receiving country “are satisfied that the transaction will generate positive conservation benefits to the species.”

Nevertheless, the case of 4-year-old male panda Xing Hui (meaning Twinkling Star) and same-aged female Hao Hao (meaning Cute) is a prime example of China’s panda diplomacy, and it presents some insights into this fluffy part of the PRC’s public diplomacy. What this latest round of all show is that besides all of the efforts to promote and support animal conservation and biological research, sending pandas abroad is a strong symbolic aspect of China’s foreign policy, used by the Chinese government to win hearts (less minds though) in selected foreign countries. In addition, it points to the interesting fact that China is able to integrate international partners into its attempts to shape its global image, and even to make these partners pay for China’s image management.

The conditions of the China-Belgium contract illustrate that panda diplomacy is a cost-effective undertaking, at least for China. Normally, a pair of pandas is on loan for 10 years and costs $1 million annually. Xing Hui and Hao Hao will stay in Belgium for 15 years and their price is somewhere between an estimated €10m in total and an annual fee of around $1 million for China. For Belgium, borrowing these pandas will cost more than what it would take to look after 40 elephants.

Furthermore, the zoo is spending over $10 million for a panda enclosure. Annual upkeep is estimated at $50,000 and the pandas are insured for $1 million each. On top of that, the zoo will have to invest in enormous amounts of bamboo. What makes this deal even more striking is the fact that when the pandas breed – and this is the official reason why they are sent abroad – it is normally the case that the hosting zoo has to pay another $500,000 dollars to China. Overall, it is stunningly expensive to host the pandas and they can become a serious financial burden for the hosting zoo. In Adelaide, for example, the pandas were a major reason why the zoo there had a debt of 24 million Australian dollars.

Considering these factors, the question is why engage in panda diplomacy at all? For China, the answer is quite clear. First, it can position itself as a kind friend who is generous enough to share two of its most precious “national treasures.” This generosity becomes even more pronounced in the case of Belgium, where serious debates between rivaling Dutch and French speaking communities emerged, as did the question of which Belgian zoo had the right to host the pandas. Some Dutch speakers were angry that they would be going to a zoo in the French-speaking part of the country. From the Chinese point of view, what more could you wish for than having foreigners quarrel with each other over the right to host Chinese pandas?

Second, China reaches a much wider audience with pandas than with the Confucius Institutes, China Daily, CCTV, or any touring arts group. Third, and particularly remarkable, the otherwise critical global media forget about human rights, Tibet, terrible air quality in Beijing, and so on when it comes to the pandas. The old journalistic rule of thumb that babies and animals always “work,” in combination with the child-like image of the giant panda, makes these animals ideal for the media age.

Less clear is why international zoos engage in panda diplomacy. Yes, it helps the zoo to raise its scientific profile and prestige if giant pandas produce cubs. However, this is not an easy undertaking, as giant pandas are unusually reluctant to have sex, at least in captivity, and females only go into heat for between one and three days a year. And yes, pandas are absolute crowd pullers and therefore are good for business. France’s ZooParc de Beauval recorded almost 50 percent more visitors after its pair of pandas arrived two years ago, and visitor numbers to Edinburgh zoo leapt 51 percent in 2012, the year after they began hosting pandas. However, while these numbers normally decline after a certain period of time, the cost of hosting remain the same, making the benefits of hosting questionable.

And not only are these animals expensive, but the receiving country has to offer China something in return. This, of course, is not noted officially, as pandas are supposed to sent abroad for breeding and conservation purposes only. But China is not just renting the pandas out to anyone: in the case of Canada, for example, various commentators were of the opinion that the pandas were a gesture of gratitude that was described in the context of a “raw materials for panda” deal.

Although the deal was negotiated between the relevant offices in charge of conservation in Canada and China and the hosting zoos, the change of attitude by Canadian officials towards China possibly made it easier to secure the agreement. In 2006, when Prime Minister Stephen Harper took office, his conservative government cooled its relations with China. But times changed and Harper, who once promised to put “Canadian values” ahead of “the almighty dollar” in trade with China, made it clear that trade is now what matters most in dealings with the ruling Communist Party. During his second official trip to China in early 2012, Harper signed more than 20 commercial deals worth almost $3 billion, and a declaration of intent on a foreign investment protection agreement, after 18 years of negotiations. These deals included agreements to ship additional Canadian petroleum, uranium, and other products to China. As some analysts have argued, the main purpose of the visit was “to secure new markets for Canadian oil” as it found a very interested customer in China.

In contrast, when looking at Belgium and China, it is less obvious what the small European country could offer China in return for the pandas. Belgium is China's sixth-largest trading partner in the European Union, with total trade in goods of 21.2 billion euros ($29.1 billion) in 2012 and a bilateral trade volume of 26.3 billion U.S. dollars. Belgian Prime Minister Elio Di Rupo said he aimed to enhance cooperation with China in such fields such as foreign investment and people-to-people exchange, especially among youth. Also, a new Belgian visa application center was opened in Beijingtwo days before the pandas left to boost tourism from China.

Another, admittedly speculative, piece of the puzzle might be the following: just one day before the panda deal was announced in September 2013, China got permission for the direct import of Belgian riding horses, mainly the world-class Belgian Warmblood (BWP), instead of buying them from a third country.

While this might seem irrelevant, the China Horse Association explained that Belgium has about 350,000 horses in total, one horse for every 31 people, while China has 6.5 million horses, one horse for every 200 people. “Belgium is a small country, yet it is superior in terms of horse riding. China may be big in numbers, but it's not ‘strong’ in the horse industry,” a representative of the Association said.“ The horse trading agreement between the two countries is significant. We wish that we can learn more about the advanced concepts and technologies from Belgium in order to promote the further development of the Chinese horse industry.”

Whether this decision had any influence on the panda deal is up for debate, but the timing is remarkable. The international star of animal diplomacy, however, is and will remain the giant panda, as will be seen in early April when Xing Hui and Hao Hao make their public debut in Belgium.