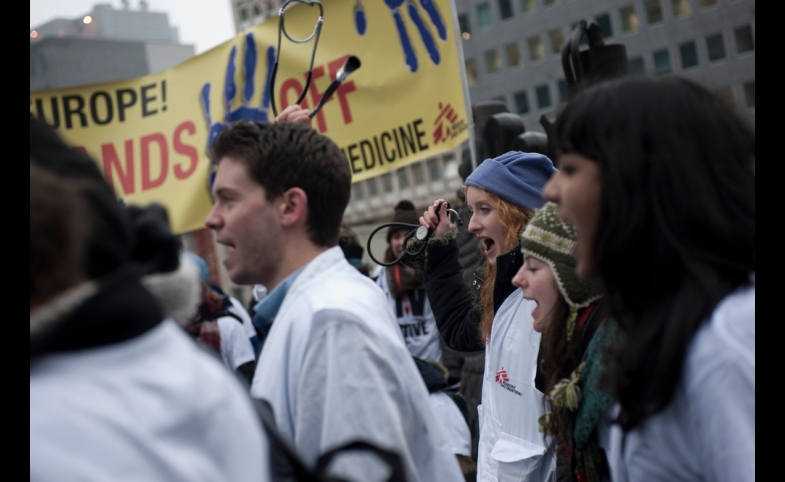 It can be argued that no organization has used the tools of public diplomacy as effectively as Medecins sans Frontieres (MSF). This non-governmental organization (NGO) was founded in Paris in 1971, and currently provides health services to thousands of people in more than 70 countries. After winning the Nobel Peace Prize in 1999, MSF used the prize money to launch the Access Campaign. The goal of the campaign is to increase the development of and access to life-saving and life-prolonging medicines, diagnostic tests, and vaccines, for patients all over the world.

The Impact of Public Diplomacy

MSF employs traditional public diplomacy tools to achieve these goals. According to press officer Joanna Keenan, the Access Campaign uses a wide range of tools, including public speeches, op-eds, events, reports, and press releases, to inform the public in countries severely affected by tuberculosis and other diseases abroad about the need for medicines, vaccines, and supplies.(1) In his book Contemporary Diplomacy, Geoffrey Allen Pigman explains how sophisticated use of print, audiovisual, and electronic media is the key to successful public diplomacy campaigns.(2) What is unique about the Access Campaign is that it amplifies the voices of patients who would otherwise be voiceless in the crowded global health landscape.

One example of the success of the Access Campaign is its “Europe! Hands Off Our Medicine” Initiative. This initiative was launched in 2010, while the European Commission was negotiating a free trade agreement with India that would have limited the generic production of certain medicines and significantly reduced the supply of affordable drugs to patients in India and other low-income countries. As a result of the Access Campaign, EU Trade Commissioner Karel De Gucht received thousands of e-mails and letters from citizens in every EU country and abroad.  The resulting public pressure contributed to the most harmful provisions being removed or improved, although the negotiations are yet to be finalised.

MSF is now collecting signatures for its DR-TB Manifesto, which was co-authored by Phumeza Tisle, a 24-year-old South African woman who was cured of XDR-TB in September 2013 after spending four years on treatment. Despite recovering from the disease, the treatment was extremely painful and the side-effects left her permanently deaf. In addition to blogging about her treatment, Ms. Tisle wrote the manifesto so that other patients don’t have to endure the same experience: “I had to take at least three medications, more than 20 pills daily, supplements, and injections,” Ms. Tisle wrote in her blog. “It is just too much.”(3)

Participating in international events is another way that the MSF Access Campaign engages a variety of audiences. Later this month, Ms. Tisle will travel to Geneva to give the signed manifesto to officials at the World Health Organization (WHO) during the 67th World Health Assembly. This is not the first time that Ms. Tisle has spoken in front of a global audience. In November 2013, she participated in the European premier of the documentary film Exposed at the World Conference on Lung Health in Paris, France. During the event, she spoke about her life, both as an XDR-TB and as a survivor, to a full audience, which gave her a standing ovation.

Beginning on May 19, Ms. Tisle plans to engage WHO officials and government representatives and their constituencies to advocate for better services for patients in need of or currently undergoing treatment. Although some may argue that the diagnosis and treatment of drug-resistant TB is a complex matter involving intellectual property and other financial considerations, the Access Campaign has framed the lack of access to MDR-TB diagnostic services and treatment as a humanitarian crisis. While many issues will be discussed at the assembly, the Access Campaign’s efforts are instrumental in making sure that the TB epidemic is front and center. More importantly, however, the campaign has also used public diplomacy to communicate what the next possible steps will be. As Peter van Ham argued in the latest Routledge series, Relational, Networked, and Collaborative Approaches to Public Diplomacy, NGOs such as MSF frame the issues to be discussed at these venues in ways that inform the international community by stating “what is important, and what range of options and solutions is for which problems.”(4) For their framing to be accepted by their target audiences, David Fairman asserts that NGOs must explain the issues “in a way that is morally compelling, taps into emotion, arouses a sense of urgency, and makes it clear that action can solve the problem.”(5)

The Access Campaign only has to cite WHO statistics to generate awareness of the urgency of solving the TB crisis. Although the incidence of TB has been falling over the past decade, drug-resistant TB has become an even more serious threat to global health. Less than 25 percent of people with drug-resistant forms of TB were diagnosed in 2012, and of those, just one in five received treatment.6) The longer people with MDR-TB remain undiagnosed and without treatment, the more new infections will occur, as a person with TB can infect 10 to 15 others every year they remain infectious.(7) Treatment renders patients non-infectious, but as Fairman pointed out in Negotiating Public Health in a Globalized World, “There is neither a lucrative market nor any intellectual property incentive to engage in research and development,” so the diagnostic and treatment tools for tuberculosis and other neglected diseases remain largely inadequate to the task of controlling the epidemic.(8) Nevertheless, by showing the human cost of inaction, the Access Campaign has shaped public debate and is working to persuade the international community to proceed with potential solutions to the crisis.