Home|Country Music Diplomacy: Mama, let your cowboys grow up to be Diplomats

Country Music Diplomacy: Mama, let your cowboys grow up to be Diplomats

Good cultural diplomacy is always drawn from the unique.  American country music is one area that projects a wholly American image of the rugged hero sitting high in the saddle or a scorned yet powerful woman singing about lost love. Country songs are about what the French would call la condition humaine, universal stories strummed on a guitar. As such, country music has a vast global appeal. While it is debatable in which category Elvis or Johnny Cash might fit, we can reasonably place them in overlapping categories that include country music and American musical icons with global brand status.

Music has long been a potent platform for expression, and thus for cultural diplomacy.  Perusing recent PDiN headlines, we find that the youth of Kashmir have been turning to hip hop and rock-and-roll as a means to nonviolently express their frustrations with the status quo, and using music as a means for dialogue and conflict resolution. In Pakistan, secular musicians are using their craft to push back against the clerical establishment’s attempts to impose increased religiosity on Pakistani society. Meanwhile, Delhi has been jazzed up amidst a festival that brought some nine global jazz bands to the Indian capital for a bit of cultural exchange. And around the globe, in Montreal the Korean pop wave has been washing over Canada’s fair shores.

I first encountered country music abroad, in the middle of Bohemia of all places. Later, when working as a Press Officer for the Israeli Consulate to the Republic of Texas, I wanted to organize a country music program to visit Israel—to bring a country singer out to Israel, and to strum his guitar while floating in the Dead Sea and to visit the Western Wall and Via Dollorosa in a big ten-gallon hat. Then bring him back to Texas and Oklahoma, and on the country music stations talking about how much he luved his visit to the Holy Land—public diplomats who share the same twang always make the best ambassadors. It was a good idea that never made it up the ministry food chain.

More recently, I found those American campfire songs in India. I got a hint from the book Shantaram, but I encountered it myself with the Whiskey Lullaby that I kept hearing bouncing around in my office at India Future of Change in Delhi. And when we buried him beneath the willow, the angels sang a PD lullaby. Turns out it was the ring tone of an officemate named Suresh.  The other officemates mentioned over lunch that India loves country music.

I saw the influence of American country music first hand as one evening my Indian roommate kept playing Don Williams over and over again. He told me how much he loved country to the point that he had proposed to his wife while playing the Don Williams song, “It Must Be Love.”  I started Googling the artist and found sites dedicated to Don Williams in Slovenian and other languages.

Should the U.S. State Department be interested in orchestrating government-led country diplomacy tours, there are tremendous partners who can help promote some good old American culture such as Country Music Television (CMT) among others.  It would be great to see a reality show on CMT about country singers touring the world and the reactions therein.  Even more so, I would love to see it as a bit of American female empowerment and send a honky tonk country woman tourin’ about.

As previously mentioned, some country music diplomacy has been conducted. Another great instance of country diplomacy has been conducted by American Voices, a not-for-profit organization that conducts cultural diplomacy and cultural engagement. American Voices carried out two projects called “Country Eastern” in 2005 and 2006, sending Austin singer/songwriter Jesse Dayton to Kazakhstan and Vietnam, respectively. The tour through Vietnam came with the support of the U.S. Embassy in Hanoi, while the tour through Kazakhstan was supported by private funds. 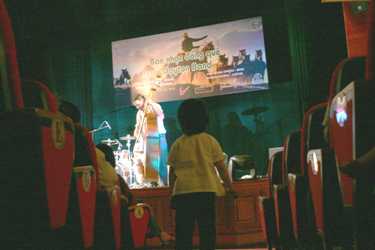 Jesse Dayton and his band perform for an audience in Vietnam.
© American Voices Association, 2006

As part of these tours, Dayton was paired with local musicians and had some raucous performances that combined Country and Eastern musical styles. According to John Ferguson, Executive Director of American Voices, “Country music is very big in Vietnam, Indonesia and Burma in particular—almost unheard of in Kazakhstan, but even where it was unknown it had huge appeal.”

As I have noticed in the Shanghai Expo and Taipei Flora Expo, different states like Texas and Montana do a bit of state branding; getting some state buy-in to a country music diplomacy tour could be a great way to get Red State America to appreciate what cultural and public diplomacy is really about.

In my two-rupee opinion, I would send a cultural diplomacy country tour to India and the supremely musical Indonesia and Philippines. You could achieve some great cultural exchange opportunities in all three countries. Heck, the same way I propose sending Taiwanese or Malaysian night markets abroad, I would send the whole rodeo as a bit of cultural diplomacy. I have personally witnessed how much the Japanese loved frito chili pies and deep-fried oreos in some state fair-like cultural exchange in Japan. But let’s not put the wagon before the horse….

Simply put, American country music is an internationally popular brand in itself, and something that communicates uniquely American cultural values. Helping it to venture off the American range could provide the United States with some powerful and creative cultural diplomacy opportunities.

Author Biography
Paul Rockower is a Visiting Fellow at the Taiwan Foundation for Democracy, and a journalist who writes about Jewish communities in far-flung places. His series “Tales of a Wandering Jew” was published in the Jerusalem Post and his articles have appeared in numerous Jewish newspapers. His journalism and traveling endeavors have taken him to nearly 45 countries. Paul recently graduated with a Masters of Public Diplomacy from the University of Southern California.